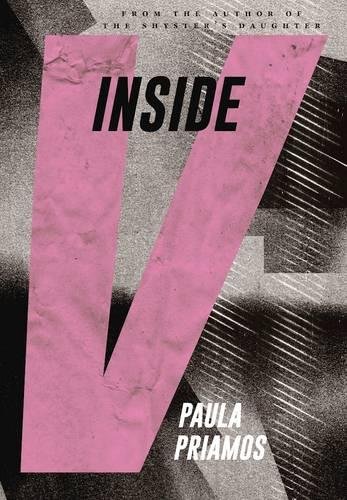 Love, in the world of Paula Priamos’ new novel Inside V, is powerful, primal, obsessive, and deadly. Former L.A. defense lawyer, Ava, has a rock solid marriage, the couple being devoted to one another since first meeting at her husband Grant’s first wedding.

Years later, they are still passionate. That’s why Ava is shocked when her beloved husband is arrested for statutory rape. Her trial experience leads her to believe that Grant will be convicted, and he is. But nothing could prepare her for waking up five days before he is slated to report to jail and finding him gone. Now Ava will leave no stone unturned in her quest to discover what really happened the night of the alleged rape.

Priamos has done a bang up job with her first thriller. Her writing is crisp and colorful, but she keeps it lean so the story speeds along. Ava and Grant are the prototypical millennial power couple: on the young side of middle age, madly in love, and purposely childless. As Grant’s spurned first wife points out, “You two love each other too much for someone else to get in the way.”

This perfectly sums up another theme of the novel: jealousy. In a perfect world, such intense love should lead to perfect confidence in the love and fidelity coming from the other person. Unfortunately, Priamos posits, this is not the case. Perhaps it is finding one’s partner so intensely desirable that leads to suspicions of betrayal. Until the end, Ava is never quite sure that Grant wouldn’t turn his powerful sexual presence on another person. Later it is revealed that Grant has similar dark suspicions about Ava.

A backstory concerning Ava’s parents further plays to themes of obsession, desire, and murderous jealousy. Priamos does a beautiful job of luring the reader into seeing her characters one way, and then tossing those notions about. What she does especially well is making sure that the turns are never a 180, and they don’t feel forced. It’s after a series of small tweaks that a story completely different from the opening narrative is revealed.

Contemporary reviews and promotional materials will inevitably compare this novel to two popular thrillers, Gone Girl and The Girl on the Train. While these are similar in having twisty, turny stories, the comparison ends there. Inside V shares many more genes with Scott Turow’s excellent Presumed Innocent. Priamos clearly knows her way around a courtroom, and it shows in sly observations, discussion of subtle jury manipulation and even how much clothing choice can affect a jury’s decisions. Her story is fascinating and detailed, and hauntingly believable.

Priamos has only two small stumbles in the course of this fast moving narrative: first, the backstory with Ava’s parents seemed superfluous. Ava and Grant held more than enough surprises to sustain this greyhound-lean story; the substory felt like too much. Secondly, mentioning how stunningly gorgeous Ava is every time she interacted with a male other than her father seemed like overkill. We get it—she’s pretty, so why would he cheat (or so the narrative would have us think)?

These were small blips in a very, very good thriller, though. Priamos has much to be proud of with the release of this novel.