Us vs. Them: The Failure of Globalism 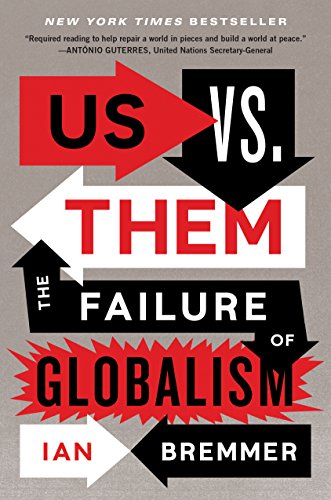 “Globalism contains the seeds of its own destruction. Even as it makes the world better, it breeds economic and cultural insecurity, and when people act out of fear, bad things happen.” This is the succinct message of a very succinct but reader-friendly analysis of mounting problems in the United States and worldwide.

Many ideas in this book will be familiar to readers of The New York Times and other major newspapers, but the data and the linkages drawn by the author will deepen their understanding and perhaps shock them with a new awareness of imminent dangers.

For example, many readers will know that automation can generate unemployment. But would they know that innovations in machine learning threaten 47 percent of all jobs in the United States, 69 percent of jobs in India, and 77 percent in China?

The author concedes that workers can be trained to team up with robots, but “the transition will be brutally difficult on an historically unprecedented scale.”   The “virtuous circle that depends on good demographics, labor mobility, economic growth, and political reform is beginning to break down. . . . The global introduction of robotics and A1 . . . will sharply reduce the low-wage advantage” that helps poor countries become middle-income. The youth bulge will become a threat rather than an asset. Jobs in China may return to Kentucky. What then will happen to China? Its virtuous circle may become a vicious circle.

Ian Bremmer is now a foreign affairs columnist for Time, a professor at New York University, and president of the Eurasia Group, a political risk consultancy. His own career illustrates how—with hard work, luck, and seed money from outside—one can rise up from poverty to intellectual and material success. Bremmer grew up in Chelsea, a seaport town of 36,000 abutting Boston. Its school system was so bad in Bremmer’s youth that the town invited Boston University to manage and reform the school system from 1989 to 2008. Bremmer’s emergence from this milieu resembles that of J. D. Vance, author of Hillbilly Elegy. When these authors write about the malaise of an environment, they know whereof they speak.

Bremmer offers case studies of 12 developing countries—China, India, Indonesia, Russia, Turkey, Brazil, Mexico, Venezuela, Nigeria, Saudi Arabia, Egypt, and South Africa. Some of these governments will have the foresight, money, and talent to prepare young people to adapt to rapid technological change. Others won’t have the necessary money or political will.  Others will not recognize the scale of the challenge.

Many of the fault lines and pressures described in today’s news will become more acute tomorrow. Across the globe there will be more protectionism, more walls against outsiders, more citizenships for sale to qualified investors and scientists, and more censorship by nervous governments. Think-alike communities will probably increase in the United States as it becomes a majority non-white nation.

New technologies will help governments know what their citizens are doing and how to stop them from doing it. India has enabled a biometric identification system that already lists more than a billion people. China’s “reputation system” tracks not only one’s credit score but also one’s school records and political activities, such as signing a petition. President Xi Jinping’s “Chinese Dream” does not focus on individual rights but on a strong and disciplined ruling party and state supposed to lift the Chinese people and move them forward.

To deal constructively with all the challenges of globalization and modern technology, Bremmer says, governments and societies must revisit their systems of education, taxation, and health care. Some form of guaranteed income may be needed, as recognized by Thomas Paine in 1797 and more recently by Friedrich Hayek and by some politicians in Singapore, Brazil, and India.

One positive sign: American entrepreneurs have begun to implement programs to invest in communities hard hit by globalization.  AOL cofounder Steve Case and J. D. Vance have created an investment fund called “Rise of the Rest.”

Donald Trump did not create the problems of “us versus them” but this problem—with its inequality and despair—helped create him. He won the presidency with votes from just 26.3 percent of eligible voters while nearly 45 percent of eligible voters stayed home. Less than one in three young Americans now say it is important to live in a democracy. One in six Americans believe it would be good to have military rule in the United States.

According to Bremmer, remaking the relationship between citizens and government is more likely than walls to create security and prosperity for the greatest number of people. Bremmer concludes with the observation that humans use their ingenuity to create the tools needed to survive. This synthesis of the issues posed by “us versus them” leads one to hope that Bremmer’s hope is well founded: that necessity will again become the mother of invention.