This is US: The New All-American Family 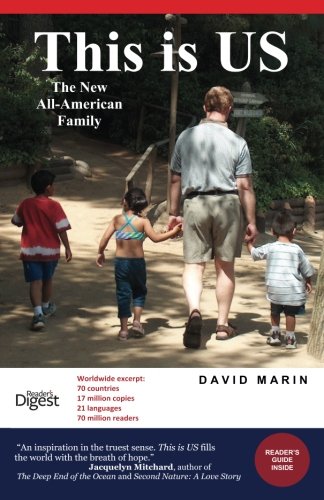 “Mr. Marin has not only withstood the tribulations of parenthood, racism, and ignorance, but is also a fantastic writer who knows how to tell a tale that is equal parts heartbreaking, confusing, honest, and inspiring. This guy can write.”

“It was no mystery why California had 98,000 children stuck in foster care. There were not 98,003 because I was stubborn.” Thus proclaims the proud single father David Marin, who adopted three young siblings and lived to tell about it. Not only do he and his children survive, but they also thrive.

If This Is Us: The New All-American Family were simply another ill-fated personal memoir about someone who believes his or her life story is worth sharing but has no storytelling chops to make the read worthwhile, it would have gone quickly to the bottom of the “to read” pile or been dumped in the recycling bin.

Lucky for us all that Mr. Marin has not only withstood the tribulations of parenthood, racism, and ignorance, but also is a fantastic writer who knows how to tell a tale that is equal parts heartbreaking, confusing, honest, and inspiring. This guy can write.

Here are some examples of his adept use of metaphor. “There were small mammals with more parenting experience than me.” And, “I wanted to help them before their pain metastasized, like mine, from memory to rebellion, permanently roosted in their psyches like the beaked shadow of a dark-winged bird.”

This is the story of a single professional man who gets fired for going to adoption classes (and later wins a lawsuit against the company that did so), learns about the frustrating and mind-boggling social service system in California, and proceeds to fall in love with three young children who have been through the ringer.

In spite of his own perceived inadequacies as a new parent who continually steps in one mess after another, he learns the ropes. Surprisingly, or perhaps not, it is the inadequate and inept social services system that presents the greatest obstacles—not the biological mother nor the trauma the children have experienced that reflects in their behavior making them impossible to place in a foster home for any length of time.

Frustrations with county classes moved, postponed, or canceled altogether; court dates changed again and again; a distant relative coming out of the closet at the last minute; or prejudice from some county social worker with a chip on her shoulder about a single father adopting children of an apparent different race—all are grist for the mill in Mr. Marin’s winding road to final adoption.

At one point, while thinking of his own father, he says, “He was the Hispanic father of pale kids. I was the pale father of Hispanic kids. We were a human anagram.”

There is a telling moment in this story when the author is finally made privy to his children’s records and he sees what has (or hasn't) been done to protect them and/or support their adoption. He says, “My Kafka transition from an observer on the wall to a fighter on the floor took just a few moments—I would protect my kids, not with Social Services, but from them.”

David Marin does not mince words, nor is it his intent to give adoption a bad name. Quite the contrary, he encourages it, but he wants to let people know the reality of what they may be getting themselves into. A few Davids fighting the Goliath bureaucratic system from within, such as a social worker named Scott, a good lawyer, some family, and friends, all helped Mr. Marin maintain his sanity and navigate the mousetrap he found himself caught in—but not everyone has such advantages.

There are a number of families—with whom this reviewer is personally acquainted—who have and/or are experiencing similarly mind-numbing roller coaster rides in the adoption process. The author is not alone in his story. He has given voice to thousands of similar stories in his state and across the nation.

This Is Us: The New All-American Family is a loud drumbeat to changing the status quo so more children like David Marin’s Javier, Adriana, and Craig (who were ages nine, six, and four when they were adopted) can have the kind of support, love, and hope that all families deserve.