The U.S. Navy: A Concise History 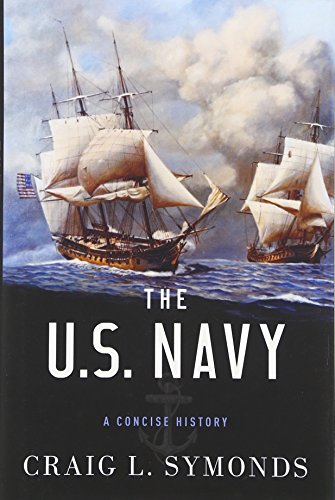 “a splendid little read that tells the story of America’s Navy with just enough detail and anecdotes to engage . . .”

The title of this book is aptly descriptive. In a mere 152 pages, Dr. Craig Symonds, Professor Emeritus of History at the U.S. Naval Academy, covers almost 240 years of the heritage of the U.S. Navy. There is a definite challenge to writing a volume like this, and clearly Dr. Symonds has made some choices about what to narrate and what to forgo.

Because it is a concise volume, there are no sweeping battle narratives and a minimal amount of detail to keep the chronicle moving; however, given the succinct narration, what the book does convey is the contentious and often erratic relationship between the United States and its naval strategy, and the subsequent ebb and flow of the Navy.

In a very short space, Dr. Symonds narrates how, until the beginning of World War I, the Navy basically was a crisis response force, expanding in war time and contracting in peace time, with no real desire or need for a comprehensive naval force or maritime strategy.

Only in the 20th century, and really only after World War II, has the United States maintained a genuine “blue-water” navy capable of constant world-wide presence and able to perform a variety of combat and humanitarian missions.

This debate of the role of naval power in America’s defense and foreign policy is described very well in a minimum of pages and for the beginning student or casual reader, this book, which can easily be read in one sitting, provides a highly readable introduction to America’s Navy.

As a concise history, the book does provide a comprehensive  “Further Reading” section with some marvelous recommendations for readers desiring to study a particular era, topic, or battle in depth.

This is a splendid little read that tells the story of America’s Navy with just enough detail and anecdotes to engage a general reader, while offering a starting point for a more interested student who may want to start with a concise survey of American naval history before diving into a particular topic.