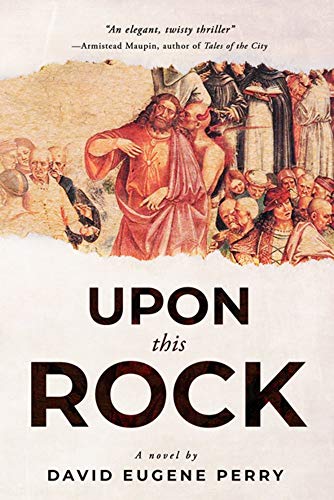 Lee and Adriano are a gay couple on sabbatical from their public relations tech firm to Orvieto, Italy, who become ensnared in an international conspiracy involving the death of Andrea, a Catholic deacon who jumps off the town’s cliffs on the eve of his ordination into the priesthood.  It is the plot device in Eugene Perry’s potboiler thriller Upon This Rock that involves Vatican politics back to the Medici dynasty, and up to Benedict’s abdication of the papacy in 2012.

Perry’s shaggy dog tale is immersed in the history, art, architecture, and rumors of gay enclaves in the Holy City, and cryptic prayers in the Orvieto hidden catacombs, not to mention it's about human sex trafficking.

The couple meets Marco, a restauranteur and a willing guide, who shows them their villa that a meddlesome colleague of the couple has arranged, and they hit it off. At a local café, they hear about the tragic death of Andrea.

Even with the serious themes, Perry’s narrative is written with a wink. Lee and Adriano’s dialogue is often canned repartée a la Myrna Loy and William Powell, but some of it reads as too clever, like rapid-fire quips with pop references from Absolutely Fabulous to echoes of the Da Vinci Code. The 15th century Pope Clement who is self-exiled in Orvieto after the British sacking of Rome is written so broadly that it comes off as camp.

Meanwhile, there is deep dish about the gay rumors of hustlers, the most famous of whom has a select client list and also happens to be the descendent of a noble Swiss Guard of the 16th century.

Perry paints a gallery of cartoonish locals caught in betrayals, sabotage, intrigue, and canoodling. Only a mystic feline knows where all the bodies are buried. Perry packs everything into the narrative, including the ravages of the deep blue Mediterranean Sea.

The structure of elliptical cliff hanger chapters adds extra pieces to the puzzle, going back and forth in time. Perry weaves in the romanza of Lee's and Adriano’s personal journeys as gay men and the kismet that brought them together. There are the friendly but often sinister cast of duplicitous characters, and in the shadows, brutal villains. All the main characters also seem to be walking encyclopedias of, among other issues: Medici history, Orvieto history, and Vatican gossip.

Perry’s plot of a seminarian victimized by the Vatican’s demonizing LGBTQ+ people vis-à-vis the malfeasance they have demonstrated over millennia to cover up sex crimes among the clergy is well drawn in this novel.

But the many plot points and threads all start to fray in Upon This Rock. That the author can tie them together by the end is surprising. But at key points, even with some of the nail-biting suspense, the narrative starts to buckle under their weight before you are tempted to jump off the mental cliff yourself.