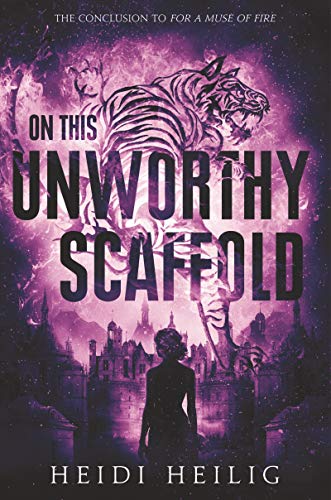 In the final book of the trilogy, Jetta Chantray, necromancer and shadow player, must finish her quest to save her people, her land, and kill her biological undead father.

Jetta and Theodora are finally allies, and travel together to the Aquitan springs where elixir for Jetta’s malheur originates (the “madness” modeled after author Heidi Heilig’s own bipolar disorder). Without the elixir, Jetta has become volatile and unable to discern reality from fantasy. Also in Aquitan is a book Jetta needs to help bring about an end to Le Trepás—an undead nécromancien determined to kill anyone who stands in the way of his grabs for power.

Jetta and Theordora’s arrival in Aquitan ends up with Theodora captured and Jetta forced to perform one final shadow play for the king, while the Tiger (the rightful king), Leo (the love interest), Akra, Cheeky (the sex worker), and Tia stalk Le Trepás directly. Jetta puts on a performance only Heilig could pull off, with play bills and sheet music included in the book. The king is brought to his knees, Jetta gains the book she needs to defeat her father, the two sets of friends regroup and a final, epic, dark and magical showdown takes place.

On This Unworthy Scaffold is easily the strongest book of the trilogy. While all three contain multiple storytelling elements (first-person narrative, scripts), sheet music, and play bills, the first two books occasionally suffered from slow plot movement. The pacing is much faster in Scaffold, and the last handful of chapters offer a rollercoaster of events and emotions both overwhelming and subtle. The lingering emotions at the end of the book present a delectable buffet that deserves to be savored again and again.

Heilig has a knack for stringing along reader emotions for books and then finally delivering not a punch, but a soft silk that floats onto the page. The silk, when it lands, has far, far more power.

“My hands shake as I pick up the broken bottle, trying desperately not to spill the last drops. I dip my fingertip into the remaining ink and open the book, marking the first blank page with the Keeper’s symbol: knowledge. Just as the blood did, the ink sinks down and disappears. But this time, it floats back up, swirling like a black storm on the page, and settling into new words:

Bits of fairy tale nostalgia weave through the narrative as well, playing into the established magic system and making the world that much more real to the read.

“I had heard another story once—a foreign story, from the Lion Lands—about a green silk carpet dyed with magic to make it fly. I don’t have dye, but I do have blood, so I coax down one of the souls of the bats clustered along the ceiling and draw it into the rug beneath me. It wobbles and flutters as it rises, but it’s steady enough to bring me safely alongside the pale bones of the enormous beast.”

And, like the other two books in the trilogy, the trans character (The Tiger) is treated not only with respect, but discussions about him are handled in such a respectful, subtle manner that many readers may miss their significance.

“CAMERON: It’s what’s best for the country, Raik. And for the both of us. You never wanted to rule.

RAIK: And did you think that meant I wanted to watch you do it?

Raik takes another step toward him, raising the pen.

RAIK: Not anymore. Not after you abandoned me.

CAMERON: I thought you were dead. It was so dark, there was blood everywhere—

RAIK: Not in the cave!

His shout echoes in the room, startling CAMERON into silence.

When we were children. After La Victoire. My whole life! While you were out becoming the Tiger, and the Aquitans made me into this.

He grips his white shirt—an Aquitan shirt—then flings his hand around the room, and all the imported treaures there.

Their puppet. The Boy King.

RAIK’S lip curls, and he gestures to CAMERON’S silk dress.

""Do you know what it feels like for the whole country to think you’re a better man than me?”

Many of Cameron (The Tiger’s) scenes carry this strong, respectful undercurrent, adding dimensionality to the world.

“CHEEKY and TIA still wear their fine dresses, but CAMERON has changed into a pair of fine trousers and a white shirt. The outfit belonged to his brother, but the crown on his head was always supposed to be his.”

The haunting emotions in the book bring a savory ending to the trilogy, leaving the reader with a bouquet of melancholy completion. Hands down the finest of Heilig’s work to date, On This Unworthy Scaffold is a must read for YA fantasy lovers who want their heart strings shattered by music, magic, and hard choices.