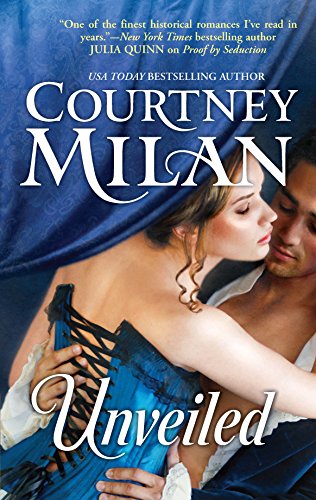 Courtney Milan’s latest novel Unveiled demonstrates why she is the author to watch in historical romance.

Ash Turner has a connection to one of the most respected and powerful titles in Britain, yet he and his brothers grew up poor and hungry on the streets of Bristol. His sister didn’t get the opportunity to grow up at all. So when Ash returns to England after a stint in India, rich, powerful, with connections of his own, armed with information that will ruin the current Duke and his family of entitled bullies, he wastes no time in doing so, ensuring that his future, along with that of his brothers is nothing like his past.

Margaret lost everything when her father was revealed as a bigamist, and her siblings and herself labeled bastards. Now the man who destroyed her family and her life is coming to stay at her family home, arrogantly looking over the books to make sure that the estate—his estate—is not being squandered. Though her brothers flee in shame to avoid the censure of society and the pain of dealing with Ash, she stays behind to nurse her increasingly ornery father and spy on Ash, ready to use any fault she find against him in the case to have her family declared legitimate and reinstated to their position in society.

This entire story is based on a clear historical inaccuracy*—regardless of parliament’s decision, the children of an illegitimate relationship cannot inherit a title. They can be recognized, but not heirs. So the heart-wrenching conflict of the novel is, in fact, false. Well, welcome to fiction.

If possible, readers should try to see past that. Consider it an alternate history. Or in a place that seems like Britain in the 1800s, but is really taking place on Jupiter. Whatever is necessary to move beyond the glaring error and get into the story, because this is a story worth reading.

Milan has woven a beautiful novel, with depth and breadth and real conflict. Margaret and Ash are not kept apart by a silly misunderstanding, or a contrived fallacy—their problems are life-altering, their decision to be together at best bittersweet.

The characters too have their depths: virtues and flaws. Ash tends to run roughshod over everyone to get what he wants, certain of his own infallibility. It doesn’t matter that he most often is infallible, the practice is still annoying. Margaret is so hung up on family honor that she allows herself to be reduced to nothing, retreating behind a victim’s wall without a fight. They complement each other, each giving the other a priceless, intangible gift, and the “grand gesture” at the end will have more sentimental readers reaching for tissues.

The baring of past grievances and experiences works really well through the course of the story, as more is revealed, and more explained. Ash’s brothers play their part, but it seems to be mostly sequel-bait. Margaret’s family provides a good foil of duty over affection, the casual selfishness of entitlement. But the main story, and the strength of the novel, always lies in the developing relationship between Ash and Margaret.

In short, Milan has infused her novel with those things most missing from a subgenre gone “lite:” character richness, plot development, and true conflict.

*After this review went live, the author contacted me to let me know that, though improbable, the Dalrymple's case is not impossible—and even has legal precedent. For more information, please visit the author’s blog here: http://www.courtneymilan.com/ramblings/2010/12/13/things-i-shouldnt-say/ where she goes into the legalities more deeply.