An Unsettled Grave (A Santero and Rein Thriller) 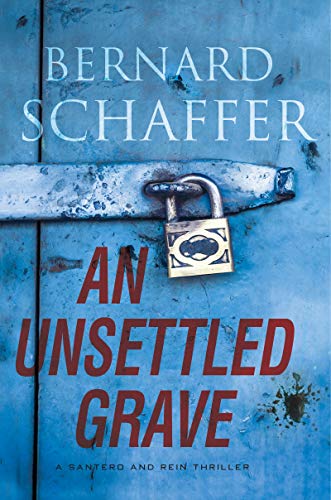 “definitely a story that may give hope that actual cold cases, even those as old as 30 years past, will eventually be solved.”

“She died struggling, clutching her heart, suffocated by the gloved hand keeping her from screams, tears running down her face.”

Thirty years ago, Hope Pugh disappeared. People said she was a runaway, but that was as far from the truth as could be.

When a child’s bones are discovered by a hunting dog in the Pennsylvania woods, Carrie Santero, patrol officer for the Vieira County DA, Coyote Township local law enforcement, is assigned to assist.

Carrie’s the newest officer on the Coyote Township force, her beat covers a “vast, unincorporated areas in the mountains extending to West Virginia and stretching across the Ohio border.”

Carrie has recently assisted Jacob Rein, disgraced cop but dedicated lawman, in apprehending the so-called Omnikiller, though others took the credit. Now, She’s ready for something more than apprehending chicken thieves.

To that end, she’s currently working a case possibly involving a patrolman, someone anyway, who’s stopping women drivers, dragging them from their cars and assaulting them. Carrie wants DNA tests done on all officers and that isn’t sitting well with the male members of the department. How dare she think one of them would actually commit such a heinous crime?

Nevertheless, the victim insists her assailant was in a patrol car and wore a uniform.

When the call comes in about the partial skeleton in the woods, Carrie’s sent on it, partly to get her out of the way.

It’s quickly decided the bones belong to Hope Pugh who disappeared 30 years before and was never found. What Carrie doesn’t know is that Jacob Rein is well acquainted with everyone who’ll eventually be involved in the case.

Hope Pugh was schoolboy Jacob’s first love, a stalwart companion against the cruelties of adults and schoolyard bullies. His uncle was the police officer investigating the case, a man who committed suicide a few days into the investigation, the same day the police chief was killed in a gun battle with a drug-dealing motorcycle gang.

This one will take a long time to solve, though it won’t be 30 years before the killer is brought to justice. In spite of that, there are other crimes committed the day Hope died that will be allowed to stay buried.

A good portion of this story is told in flashback, from Jacob Rein and Hope Pugh’s point of view. Though at first the stories seem to ramble and not have much to do with the investigation, they set the stage and soon everything begins to mesh—Rein’s uncle’s death, the police chief’s shootout with the gang, the reason young Jacob left home at the age of 12 and is only now renewing his relationship with his father.

There are good characterizations, as well as descriptions capturing the ambiance of small rural towns and their inhabitants, and emphasis on the unspoken brotherhood between various law enforcement townships that makes them band together against accusations from within.

For those not reading the previous novel involving Carrie and Rein, An Unsettled Grave gives more insight into Jacob Rein’s character as well as reinforcing his adherence to duty and the bringing about of justice. Though it starts out as Carrie’s story as she investigates Megan Gere’s assault by that phantom patrolman, once she begins her interview of Hope Pugh’s parents, the story shifts to Jacob and what happened thirty years ago to a group of schoolchildren in a small Pennsylvania town.

It’s entertaining and intriguing and definitely a story that may give hope that actual cold cases, even those as old as 30 years past, will eventually be solved.