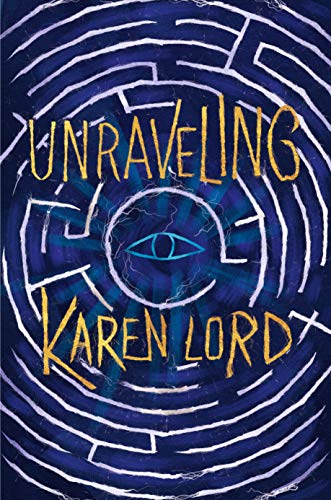 “this dive into the internecine struggles of the undying and the complexities of their interaction with humanity are a welcome expansion on the world and characters of Lord’s first novel.”

Karen Lord’s novel Unraveling, a sequel to 2010's Redemption in Indigo, dances along these strands of subjunctivity, not merely in terms of its genre (fantasy) but in the way she tells the tale.

Much of its content plays out in dreams, visions of the past, alternate futures and realities, taking the characters through many flavors of what happened and what has not happened and what might happen. As these various levels of unreality nest inside one another, it is easy for the reader to lose track of where exactly they stand—but in ways that precisely serve the purpose of the story, rather than undermining it.

At the heart of the novel are powerful creatures referred to as the “undying,” also called “djombi” in Redemption in Indigo. The characters Chance and the Trickster, who featured in that previous book, have “become human more by accident than design”—but not fully human, as their power over time and visions shows. Together with a human woman, Dr. Miranda Ecuovo, they’re seeking to find the entity responsible for a series of murders: an undying one they believe is attempting to transcend the limitations of their existence and become truly immortal.

Lord does a very effective job of making the undying seem like more than simply humans with special powers. Their relationship with time is not ours, and this colors their behavior in a variety of ways. When the human woman Dr. Miranda Ecuovo meet an angel, its speech resonates through multiple verb tenses at once: although its dialogue is initially rendered as “We are detaining a man on the path to immortality,” the narration tells us “Like a triple echo, the words have detained and will detain vibrated through the statement.”

Readers who are tired of the serial killer trope may be relieved to know that although this novel concerns itself with investigation into such a killer, the structure and concerns of the story are wholly unlike a normal police procedural. Instead of the usual parade of grisly crime scenes and conversations in the morgue, the characters muse on probability, free will, and other aspects of metaphysics.

Unraveling also joins Max Gladstone’s Craft Sequence and Robert Jackson Bennett’s Divine Cities trilogy in depicting a world that is modern in nature without being our own, blurring the line between the usually separate subgenres of urban fantasy and secondary-world fantasy.

The unnamed City where most of the events transpire is a place of great inequality, with only Freemen of the City permitted to remain within its bounds after dark, and the population of visitors, workers, and transients exists in uneasy tension with their sociopolitical superiors. It’s an aspect of worldbuilding rarely touched on in much fantasy and very well-handed here.

This novel can be read without knowledge of its predecessor, for readers willing to accept the dreamlike sense of greater significance lying beyond the boundaries of what is said here, but the ending packs far more punch with the weight of Redemption in Indigo behind it. For those who have read the previous book, it may be a disappointment that Paama only appears for a few pages, but this dive into the internecine struggles of the undying and the complexities of their interaction with humanity are a welcome expansion on the world and characters of Lord’s first novel.