The Unquiet American: Richard Holbrooke in the World 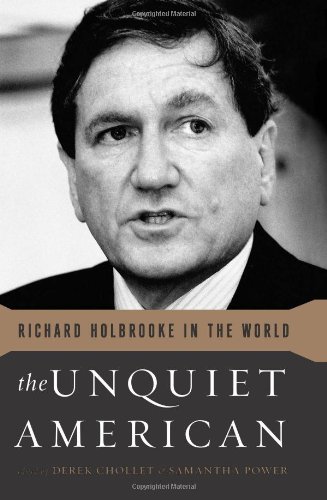 “The Unquiet American opens with an excerpt from ‘Character of a Happy Warrior’ by William Wordsworth. The happy warrior, ‘whom every man in arms should wish to be’ is one ‘who is diligent to learn . . . makes his moral being his prime care . . . looks forward, persevering to the last . . . finds comfort in himself and his cause.’ That was Richard Holbrooke.”

Richard Holbrooke was a determined man of purpose committed to public service, a champion of a leading role for the United States in a multilateral world, and above all, someone who deeply cared for peace.

The Unquiet American is the first book published after his death to record his contributions to American foreign policy as seen from the eyes (and echoed by the hearts) of his former colleagues and protégés. It is a fond recollection as a ‘memorial [and] celebration’ of his life, an insightful documentation into the informal workings of diplomacy and last, but not least, an astute appraisal of key issues underpinning contemporary international relations—the latter mainly through the inclusion in the book of a selection of Holbrooke’s own writings.

Richard Holbrooke had a reputation for being fierce and audacious, often too daring for a diplomat, and intent on getting his way. These qualities earned him some enemies and probably, more than once, cost him the job of Secretary of State, which was his dream but remained out of reach. In hindsight, that might have been a good thing for the world.

Lesser positions in terms of status are sometimes more important than higher ones with regard to effective policy making, especially in as muddy and muddled a field as that of conflict resolution. Richard Holbrooke was perhaps not always successful, but he always advanced his missions, both operationally and in terms of the knowledge gathered and passed on.

The end of the Bosnian War will forever be associated with his name, but the lessons he learned in other posts and in other parts of the world are equally important signposts for the current and future American foreign policy. Here is a selection, based on his own writings, and meant as an encouragement to read the book:

• Bureaucracy is important but a problem for Washington. Of the problems associated with the size of the administration, the more serious is that concerning “the multiplicity of chain of commands.” This tends to create stalemate and frequently leads to the wrong classification of issues: as routine, when they are in fact important, or as important, when they are in fact routine. In this context, reconciling career and political objectives is the key to balancing professional and political inputs.

• Economic issues are important for foreign policy. This is also why domestic policies will often determine the immediate results and long-term impacts of foreign policy decisions.

• The counterinsurgency doctrine is difficult to execute both as a military and civilian strategy. This is as true of Afghanistan as it was of Vietnam. Also true of both geopolitical regions is that the problems faced are, in part, the result of bad political decisions based on a poor understanding of complex processes at the local level.

• The long-term key to bringing peace and security in Afghanistan may lie with agricultural and trade policy in conjunction with the short-term suspension of eradication programs targeting poppy fields whilst, in parallel, seeking the consolidation of security through the military but also infrastructure-building.

• Assuming leadership in a multilateral world is tricky but only possible through ‘acceptance and a degree of detachment.’

• In disaster relief it is important to be as much aware of the humanitarian consequences of political decisions as of the political implications of humanitarian programs.

• Words matter, ideas are powerful and people are often the difference between good and bad policy—which is why institutions should try to avoid a narrow focus on policy as a technical field.

• The United Nations might be flawed, but it is indispensable—not as a world government but as an iterative process of harmonization toward common ends and the safeguarding of peace and security.

The Unquiet American opens with an excerpt from “Character of a Happy Warrior” by William Wordsworth. The happy warrior, “whom every man in arms should wish to be” is one “who is diligent to learn . . . makes his moral being his prime care . . . looks forward, persevering to the last . . . finds comfort in himself and his cause.” That was Richard Holbrooke.