An Unlikely Spy: A Novel 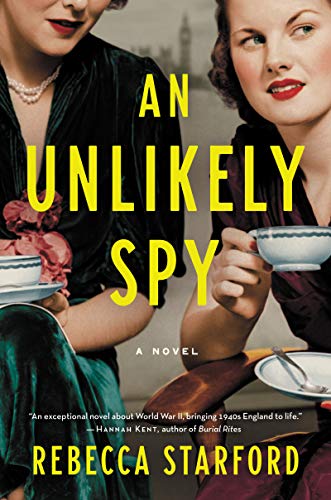 “For the reader who expects an exciting spy thriller, this book does not deliver. The plot is less exciting, but Starford’s premise holds water.”

Evelyn Varley is an unlikely spy. The protagonist in Rebecca Starford’s novel of the same name wanders through her young life knowing there is something more important for her, but the question is, What?

Her parents are average, middle class people who raise her in the typical, 1930s and ’40s English lifestyle. At school she meets two girls, Sally and her cousin Julie, who become lifetime friends.

Sally’s father, Hugh, is well-placed, and when Evelyn’s school life ends, he finds a work position for her at the War Office. And so Evelyn’s life as a spy begins.

Her boss, Chadwick, sees her as a promising agent, and he gives her a specific assignment to infiltrate a group known as The Lion Society, “. . . a group of fascist sympathisers, mostly renegades from the Establishment.” The society members began as a group who loathe Jews, she is told. But are “. . . now actively collaborating . . . to create a groundswell of support for Germany from within the political establishment.”

The leader of the society, Nina Ivanov, sees Evelyn as a resource to infiltrate the War Office and accepts her into the society.

This acceptance is exactly what Chadwick wants, and with his guidance, Evelyn moves deeper into her spy work. But what does she have to give up to make this role believable? She takes her lead from Nina and helps distribute anti-Jewish material.

The story opens after the war years when we meet Evelyn with Stephen, and we learn of their not-quite committed relationship, due mostly to Evelyn’s reluctance to share her past.

Starford presents some good conflict between Evelyn and those around her, as Evelyn’s position as spy prevents her from explaining to her friends why her attitude has taken such a dark turn, and later with Stephen, when he expresses his love for her, and her history as a spy stands in the way of her returning that expression.

Starford’s story tends to become muddled when chapters jump from after the war to before the war to during the war and back again. It is not until the end of the story that this somewhat jumbled process begins to make sense. For the reader who is not bothered by this backward and forward movement, the story will read well.

For the reader who expects an exciting spy thriller, this book does not deliver. The plot is less exciting, but Starford’s writing is solid, and the premise holds water.