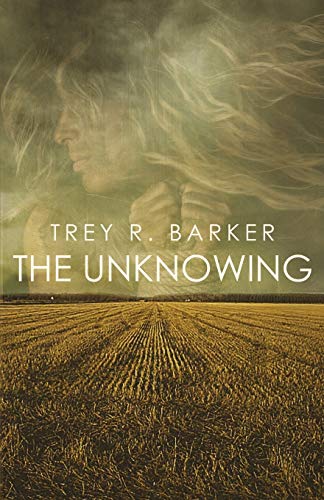 “Barker creates tension and suspense through strong chase scenes and face-to-face conflict with good and evil . . . even with good and good! And yet the story at times falls flat simply because of the main character’s inability to get beyond his own self-confidence while battling his own failings.”

Trey Barker’s novel, The Unknowing, is a story of a conflicted police detective trying to solve the murder of a 17-year-old girl, while at the same time regressing to events in his own life that block his clarity of the current crime. He wrestles with a 10-year-old unsolved murder, a childhood with an abusive father, and military conflicts that continue to surface when least expected.

Detective Wes Spahn is called to a scene where the remains of 17-year-old Suzanne Haas have been discovered. He is immediately drawn back to a 10-year-old case of Rhonda Berkner, a case he was removed from before it could be solved and one that he continues to search for answers to, hoping to find Rhonda alive.

Through his search, he quickly pins Suzanne’s murder on Mitchell Wilton, a married man in his twenties whose reputation precedes him as a womanizer and abuser.

It becomes clear that Spahn is so dedicated to pinning the murder on Wilton, that no other suspects cross his radar, even when he is directed by his boss to expand his search. His efforts are remote, and his focus remains on Wilton.

Several people come forward as witnesses, and Barker does a good job of introducing several red herrings, although he basically announces them as such because of the failed follow-through on Spahn’s part.

Because of Spahn’s failure to follow up these leads, the book tends to direct the reader toward an ending that does not allow for good suspense because it’s too much of a given.

Barker has created several other characters that are appealing in the roles he has set for them. Darlene, the woman who does radio coverage for the department is a flirt and, we learn, a previous lover of Wes’s. Officer Marshal Ritenour is a particularly nasty piece of work and one we like seeing get his comeuppance.

Chief Casteneda, Spahn’s boss is a good foil for him. A good cop, looking to make a name for himself and unable to rein in his detective. Joseph “Joey” Powell is Wilton’s closest buddy and another good red herring.

In Wes Spahn, Barker has created a truly failed character; one who is self-directed and unwilling to do anything that conflicts with his own beliefs. While in today’s stories, most detectives allow themselves to be led by their own self-confidence, there is a sense that Spahn, in his unwillingness to even consider any other bed guys, has crossed a line.

Barker has a strong vocabulary and good word usage when setting the stage. The story is set in rural Illinois just at the onset of winter and Barker’s descriptions present a bleak picture that one can actually live in.

He creates tension and suspense through strong chase scenes and face-to-face conflict with good and evil . . . even with good and good! And yet the story at times falls flat simply because of the main character’s inability to get beyond his own self-confidence while battling his own failings.

In spite of the fact that the main character’s singular direction and the obvious ending don’t provide the reader with many opportunities to work along with Detective Spahn’s investigation, the overall story has merit. Perhaps it’s the strong writing that carries the story with its sense of place; regardless, The Unknowing is worth the read.