The Unkindness of Ravens: A Greer Hogan Mystery 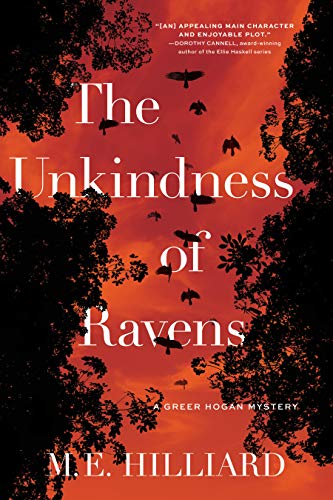 "‘The surreal, nightmare quality of the scene dissolved, and I saw only Joanna, impossibly still and silent.’"

The Raven Hill Public Library is situated in a large Gothic manor that was owned by the Ravenscroft family in the small village of Raven Hill. When the last family member died, he bequeathed the Ravenscroft Manor to the library as its new home. A brooding black raven on the wall in the sanctuary stares into the distance with beady, black eyes. Mirrors reflect the portraits on the walls of the stairway, sometimes distorting their images. The following events that take place in this idyllic, insular village will have readers biting their nails right up to the last page.

Greer Hogan, an avid reader of mysteries, leaves New York after her husband's tragic death to take a library job in the Raven Hill Public Library. She thinks she will have a quieter life—until she stumbles over a dead body. An amateur sleuth, little does she know that she will be solving a real murder case.

On her lunch break, Greer goes up to the roof to eat. Forcing the door open, she trips over a heavy object. Bending down, she sees that it's her best friend, Joanna Goodhue, and there's no pulse. "A body landed at my feet . . . The air compressed around me, sucking the breath from my lungs. . . . The surreal, nightmare quality of the scene dissolved, and I saw only Joanna, impossibly still and silent." This is the second body. The first was her husband's, who was murdered in their New York apartment. How many more bodies will she stumble over?

At first, it seems as if a heavy wooden bookshelf fell on Joanna's head as she was climbing the stairwell. An accident? Greer phones Helene, head librarian, who alerts the police. In order not to give the library a bad name, Helene decides to tell the public that it was an accident. Believing that someone deliberately loosened the shelf, Greer decides to solve the murder on her own. She relies on Sherlock Holmes, Agatha Christie, and Nancy Drew to help her solve this crime. "I hadn't spent my life reading mysteries for nothing."

She's introduced to Sam O'Donnell and Jennie Webber, the two police officers assigned to the case. She starts sleuthing around the library after hours, trying to listen to their conversations. She also listens to her co-workers' gossip in the kitchen, trying to pick up clues. The police officers see her and are not too happy to have her snooping around. But Greer is determined to solve her best friend's murder because her own husband's death remains unsolved. She suspects that the killer is a staff member and begins constructing a list of possible suspects.

When returning to her desk, Greer notices that the files she left are not in the same order as they were that morning. She becomes frightened that her own life may be in danger. Wracked with guilt about Danny's murder, her nightmares of Danny lying on the floor alone, his head bashed in doesn't let her sleep, until she takes a drink or two. However, during the day, she becomes a different person, putting on a calm front.

Is the killer after her, too?

The story takes an eerie turn when Sadie, a ten-year-old girl who frequents the library, tells Greer that she saw a headless ghost moving in the hallway and that the figures in the paintings are moving. "Yes," she said, "those pictures. The people in them move, but only at night." Did she see the killer? Or worse, did he see Sadie? Greer begins to worry that Sadie's life is in danger as well. Just to check, she goes into the hallway and realizes that the reflection in the mirrors distort the portraits so that they do seem to be moving out of their frames.

One evening, Greer decides to stay alone in the library after dark. She hears a door closing and a window rattling, but she's sure that all the doors and windows are locked. She twirls around but doesn't see anybody, and the motion sensors aren't moving, when she suddenly hears voices coming from the attic. It's Vince, Joanna's husband, and Millicent, the archivist, arguing about blackmail. "I kept my eyes on the lower landing, my urge to flee at war with my curiosity." As Greer tries to hide in the shadow of the stairwell, her heart almost stops when she sees a skeletal hand moving slowly along the wall as if searching for something. It looks like a weird apparition. Greer stands motionless, hoping that she wouldn't be seen. The lights flick on. It's only Millicent. Greer is caught.

She flies down the stairs, panting, her heart racing. But she remains calm and steady when she takes her post at the reference desk. Jennie Webber, the police officer, warns Greer to be careful. She tells her to leave this mystery to the police. But Greer doesn't listen and keeps on snooping through the archives and listening in to police conversations, hoping to glean information leading to an arrest. She has to solve this crime for her best friend in order to absolve herself of the guilt she feels about Danny. While she's having an affair with Danny's partner, Ian, Danny texts her to get home immediately. He needs help. Greer thinks it has to do with his business. She arrives home to find him dead on the floor, his head bashed in. "I didn't kill him. He was alive when I left." Greer's testimony sent the wrong person to jail. It would haunt her for the rest of her life. She came to Raven Hill to keep her secret hidden. "As long as my secret was safe, I didn't care."`                       `

Greer does bibliographical research and discovers that a five-year-old girl named Carol drowned in the Raven Kill, a section of the water with fierce waves. Carol's mother, Marjorie, who suffered from dementia, walked out of the house one night and froze to death. This was 35 years ago. Is Joanna's death related? Greer begins to suspect Vince, Joanna's husband, and Matthew or his wife Felicity. Is she dealing with a cunning, clever serial killer? She realizes that she has to outwit this murderer using her librarian's resourcefulness in order to solve the crime. She interviews each of her suspects to find out if this is a crime of opportunity or a motive. But they are hesitant to talk to her. What secrets is this village hiding?

The author is adept at using the weather outside to give the reader a foreshadowing of what's to come. Storms, birds, ravens, and crows are signs of impending disaster, and the author uses these omens to enhance the suspense. For example, the rumble of thunder is an omen of an impending storm outside just as the rumble in the library is an omen of impending death inside. "The only other activity came from the birds. They swirled and chattered, agitated by the gusts of wet wind . . . The crows and blackbirds were still swooping and cawing . . . they mimicked the anxious excitement of the crowd. Unkindness and murder.” (Ravens are associated with ill omen and death but also with prophecy and insight.)

Although she knows that her life is in danger, Greer is still determined to find Joanna's killer. She will not fail her best friend as she had failed Danny. "How often have I said to you that when you have eliminated the impossible, whatever remains, however improbable, must be the truth? Sherlock Holmes. I wished he had shown up sooner."