The United States Navy in World War II: From Pearl Harbor to Okinawa 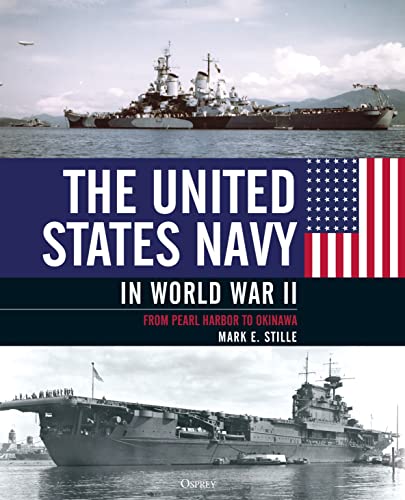 “This is a great book to have on the shelf when reading any naval history of the war to research the Navy ships involved.”

There have been a number of recent volumes reexamining the naval operations during World War II, including several from Osprey Publishing. This particular edition serves as a marvelous reference manual for the US Navy in World War II, providing a combination of operational overview and recognition guide to the major warship classes during the war.

The growth of the Navy during the war, particularly the development of aircraft carriers, was truly a testament to the industrial might of the United States. The US Navy began the war stretched between two theaters and was outnumbered and outgunned by the Japanese Navy, its primary adversary, at the beginning of the war. It took a great deal of costly lessons from early battles with the Japanese, and the serious attrition of the initial Atlantic campaign against the German U-boat menace before the Navy was able to develop not only new classes of warships, but new technologies such as radar and sonar. More importantly, the Navy quickly adapted to the new tactics for waging war across the world’s oceans and quickly began to establish dominance over their adversaries.

Every class of major warship is described in detail in this book, with some excellent drawings showing the major changes in warship design and armaments throughout the war. The amount of data provided is impressive, especially the name and hull number of nearly every major warship commissioned during the war. The author also provides his technical assessment of each class of warship, noting the strengths and weaknesses of each, while highlighting the major upgrades made to each class as lessons learned led to improvements in armor, anti-aircraft weaponry, and improvements to radar systems.

Although the Navy suffered significant losses during the war, the Japanese and German navies were practically annihilated by the time each country surrendered in 1945. The impressive industrial and personnel might of the US allowed the Navy to grow to an almost unimaginable scale during the war, fighting across two theaters and conducting numerous naval operations including dozens of amphibious assaults to dominate the world’s oceans by 1945. This is a great book to have on the shelf when reading any naval history of the war to research the Navy ships involved.