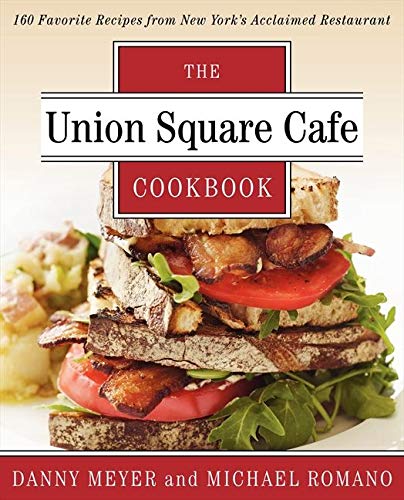 “. . . expertly adapted for home use and offers many dishes worth trying and adding to your repertoire . . . I just don’t like the idea of being given a regifted item.”

When an unsolicited copy of The Union Square Café Cookbook arrived on my doorstep about a week ago with the implied request to review it I was puzzled. “Now available in paperback” read the press release. Thinking I had missed the hardback edition and having been a fan of the acclaimed New York restaurant back when I was a New Yorker, I started to peruse it.

I was immediately drawn in. I started bookmarking recipes and dashing off shopping lists. It also brought me back to some memorable meals I ate in the restaurant including their famous snack, Hot Garlic Potato Chips and their unforgettable Lemon-Pepper Duck (to this day, the best duck I have ever eaten).

Restaurant cookbooks are famously frustrating for the home cook and usually serve only as a nice souvenir. Happily, The Union Square Café Cookbook is that rare exception to the rule.

It has been expertly adapted for home use and offers many dishes worth trying and adding to your repertoire like Braised Escarole and White Beans with Tomatoes, Mushrooms, and Pecorino—a truly delicious vegetarian main dish for chilly months that will satisfy any meat eater while qualifying for at least a portion of the weekly quota of legumes recommended in the Mediterranean Diet.

The Pan-Roasted Salmon with Citrus-Balsamic Vinaigrette was equally delicious, easy to prepare and dinner party worthy for an intimate group of four.

What’s more, Danny Meyer has offered wine pairing suggestions following each recipe—a welcome enhancement to this already good book that takes the stress out of choosing a wine if you are serving guests. (Mr. Meyer is always thinking of his customers.)

So when I sat down to write the review I did my usual due diligence on the Internet and discovered much to my annoyance that this newly released paperback edition of The Union Square Café Cookbook is nothing more than a repackaged version of the original 1994 hardback edition that won the Julia Child Award for Best First Book.

I felt like the recipient of a present I knew had been re-gifted.

Why now, I wondered? Union Square Café opened its doors in 1985 and is the anchor of Danny Meyer’s New York restaurant empire. Rereleasing the cookbook doesn’t even coincide with an important anniversary.

Coauthor Michael Romano isn’t the chef any longer at the restaurant.

And saddest of all, Hot Garlic Potato Chips and Lemon-Pepper Duck have been stricken from the menu and replaced with the usual trendy fare like Pan-Fried Sweetbreads, Braised Beef Cheeks, and Grilled Pork Belly. (In fairness they do still have duck on the menu—it is now called Roasted Rohan Duck served with black rice, roasted apples, and Brussels sprouts.)

Don’t get me wrong, Union Square Café is still a good restaurant, but The Union Square Café Cookbook has nothing to do with the restaurant’s current menu and its rerelease can be deceiving to those who are not familiar with either the restaurant or the 1994 cookbook. It would have been better if this were disclosed by the publishers/author upfront.

That said, returning to a good cookbook is as comforting as being in the company of an old friend. There’s an easy familiarity with the recipes and they are just as delicious today as they were back in 1994. I’m still cooking from Mastering the Art of French Cooking and The Silver Palate Cookbook, so why not The Union Square Café Cookbook? It is a worthwhile addition to any home cook’s library.

I just don’t like the idea of being given a regifted item.