Union Command Failure in the Shenandoah: Major General Franz Sigel and the War in the Valley of Virginia, May 1864 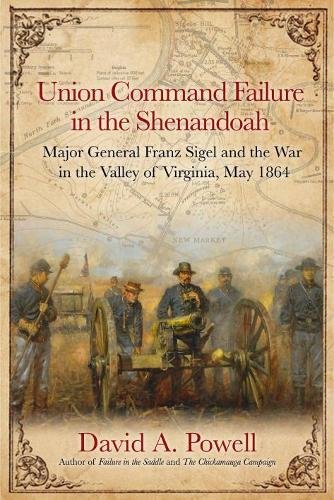 “David Powell is quickly becoming a noted historian on the war, with multiple volumes on the Chickamauga and Atlanta Campaigns.”

The battle study at hand here, the May 1864 Battle of New Market, has been covered multiple times over the years starting with William C. Davis in 1975 and more recently by Charles R. Knight less than ten years ago. The question asked by author David A. Powell is whether another such volume is necessary.

The answer, according to Powell, is yes. Inasmuch as the above cited monographs largely, and most famously due to the presence of the Virginia Military Institute’s Cadet Battalion, deal with the Confederate perspective, this book is an analysis of not just the battle but also those errors and blunders, on the Federal side, made primarily by Major General Franz Sigel but also those of his subordinates, which led to disaster on the battlefield.

The analysis extends, as well, to the greater strategic implications of the defeat that had an effect on the United States Army’s overall Spring 1864 Campaign initiated by Commander-in-Chief Ulysses Grant, a plan that attempted to pressure all points in the Virginia theater of operations so as to prevent Confederate forces from being able to successfully move their forces to each threatened area.

Although the Confederate side of the equation is also provided, Powell begins with a recounting of the Federal strategic situation in the spring of 1864 and how the main players in the Valley Campaign obtained their positions, seemingly mostly by political means and personal connections with the higher ups in the chain of command.

Grant’s intentions for the Valley segment of the campaign were based on what was originally a three prong effort to squeeze Confederate forces from north (Sigel’s army from Winchester), south (George Crook’s forces through Wytheville and Saltville) and west (William Averell’s command through West Virginia). In the event, Averell’s segment was cancelled by a manpower shortage, as indeed were all of the formations so affected in the theater.

The campaign otherwise started out well as Crook was victorious at Cloyd’s Mountain, not quite completely destroying the New River Bridge (as ordered) and then marched toward the main objective at Staunton where he expected to meet Sigel’s force. Sigel, for his part, advanced south as ordered but at a much more deliberate pace as his supply lines lengthened and detachments were necessary to safeguard them from Confederate guerillas and partisans.

Crook, due to his supply circumstances, instead moved off toward Meadow Bluff, West Virginia, leaving Sigel to his own devices in the Valley. Sigel, despite his manpower problems, sent detachments off in the advance and to the flanks both to gather intelligence as well as to outflank his foe.

The actual Battle of New Market, despite near parity of numbers on both sides, only revealed additional mistakes by both Sigel and his subordinates, leading to victory for John Breckinridge and his small army by dint of more effective leadership and better on-field tactics.

Although losses were relatively light in comparison to, say, those of the Overland Campaign around Richmond, the strategic implications were not. Breckinridge was able to leave the Valley mostly unguarded and take his troops to aid Lee at Richmond while Federal forces were largely put hors de combat for the time being, leaving the Valley once again as an invasion route in the direction of Washington and points north.

Chapter Ten, The Aftermath, specifically summarizes those critical mistakes made on the Federal side by Sigel and others although, as with many other battles during the war, an alleged disparity in numbers post-battle was to blame for the debacle at New Market and the denouement of the Valley portion of Grant’s plan.

Besides the usual requisite order of battle for both armies, the text is interspersed with several maps (with the print of some locations being nearly small enough to require a magnifying glass for some) and many photographic portraits of participants, period illustrations and one contemporary photograph of a battlefield monument.

If there is any criticism to be made, it is that the text, probably due to the printer, contains occasional missing words, transposed words and misused words (i.e. then instead of than). This is somewhat annoying, to be sure, for a Savas Beatie publication.

Despite not being a professional military historian, David Powell is quickly becoming a noted historian on the war, with multiple volumes on the Chickamauga and Atlanta Campaigns. This relatively slim volume is further enhancement to a budding reputation.