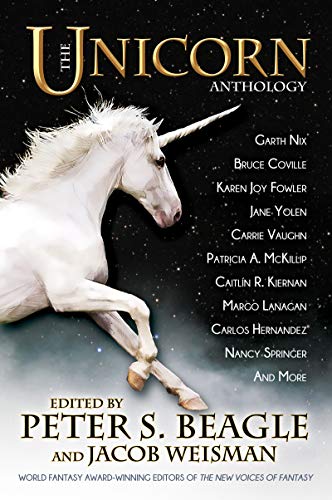 “well worth reading; however, readers should be prepared for the breadth of the stories and the occasionally problematic sexual encounters.”

Edited by Peter S. Beagle (author of The Last Unicorn) and Jacob Weisman, The Unicorn Anthology is a collection of modern and fantastical unicorn tales for the adult reader. The stories span grim to whimsical, the protagonists young to old. Some contain magic, some science and a bit of truth-stretching, and some nestle into well-worn tropes.

Of particular note are the stories that take unicorns from their medieval forests and turn them into something greater. Beagle’s own short, My Son Heydari and the Karkadann, is exactly as compelling as one would expect in the tale of brutal, vindictive unicorns that slaughter elephants and cannot be tamed even by the most gentle of boys. Beagle’s signature humor shines through the passages as well, evident in particular in the following passage:

‘The karkadann has no natural enemies. I am told that a thousand years ago, the dragons kept them within reasonable check; but, of course, in our human wisdom, we killed off the dragons in the egg and the nest, because they cost us a lamb or a goat now and again.’

There are sweet tales of innocence as well, in which innocence brings children closer together (and does not become lost), such as in The Transfigured Hart by Jane Yolen. Hart blends European unicorn mythos into a modern tale of two children finding friendship through deciphering fairy tales and their own beliefs, and, unlike so many other unicorn tales, leaves the children just as innocent as when the story begins, if not somewhat changed from their encounters.

Garth Nix brings a delightful zombie twist on unicorns in The Highest Justice, in which a princess invokes an ancient pact so that a unicorn can help the queen—three days dead—avenge herself. The princess in Justice showcases the most agency of any of the women in the book, and is a refreshing take on European medieval unicorn lore.

There were, of course, some stories that did not hit the mark. The anthology is a collection of shorts across several decades and some stories have aged better than others with changing sensibilities and understandings of consent. As the book contains no trigger warnings, however, some of the more potentially upsetting passages are discussed below.

Some stories are more grim than magical, enough so that readers not expecting the very adult nature of this anthology may be turned off. Rape is heavily employed, especially early on, and while this is perhaps to be expected to some degree when telling stories revolving around purity, the acts were not given adequate weight. Casual acts of violence felt trivialized for the sake of “erotica” and the use of young girls (not necessarily young women) as sexual objects placed a dull patina on otherwise vibrant stories.

This problem is particularly evident in A Hunter’s Ode to His Bait, in which a young slave girl (the unicorn bait) falls for her captor (the text alludes to her age at the time she falls for him to be at the height of her maidenhood, which is probably meant to be around 16 or 18—still much younger than the hunter). The hunter encourages her affections and actively lusts after her, while she is still under his control, and the story shows a very uncomfortable scene where an old unicorn and the old hunter both lust after this rain-soaked, scantily clad, slave girl.

Violent sexual encounters run through several of the stories, from A Thousand Flowers, where the reader is shown the bloody aftermath of a (probably consensual) unicorn/princess mating, to the story of a unicorn/human hybrid kept as a sex slave. Not all of these encounters are necessarily problematic, with the hybrid sex slave story showing surprising compassion between brutal magical creatures.

Other times, the tropes employed felt too Euro-centric, too tired and frayed, and clashed with an otherwise enchanting book. The Brew describes witches seducing Ian McBane for his science knowledge, somehow unable to gather a higher understanding for themselves despite having access to magic, a decent social network (covens are nothing if not a great place for ideas to spread), and repeated chats with McBane.

‘These witches were well aware of Ian McBane. They envied him his skills in the brewery, coveted his knowledge of chemistry, They, themselves, were always boiling and stirring, but they could only do what they knew how to do.’

Falling Off the Unicorn is one of two stories in the anthology with lesbian protagonists, although both just missed their mark. Falling sets up a wonderful coming of age tale about a unicorn rider and her romance with the groomer, just to crash the story’s finale. Misty can still ride her unicorn after having sex with the female groomer while another rider loses her ability to ride after simply kissing a boy. While the romance is sweet and the characters well rounded, the ending falls squarely into the problematic “lesbian sex isn’t real sex” pitfall.

Although the premise of the anthology is intriguing and many of the stories are a delight, overall the book is a mixed bag of primarily male-gaze, innocence-taken worlds, with only smatterings of the magical adventure blended with innocence that one might expect. It is well worth reading; however, readers should be prepared for the breadth of the stories and the occasionally problematic sexual encounters.