Unholy: Why White Evangelicals Worship at the Altar of Donald Trump 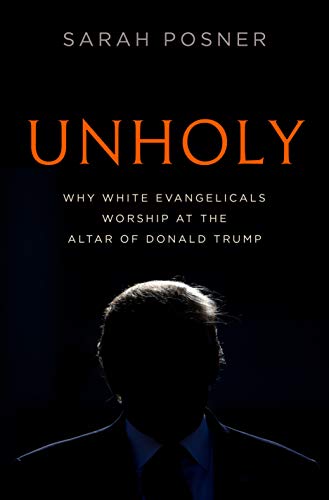 Who is best suited to understand and explain the cynical marriage of convenience between Donald Trump and America’s white evangelicals—a critical outsider, or a sympathetic insider?

Unholy is, to be sure, an outsider’s take, although from an informed outsider who has been observing and analyzing white evangelicals for more than a decade. More particularly, it is an incisive view from the left; Sarah Posner has written for The Guardian, the Nation, Salon and the Washington Post. It follows on her 2008 book, God's Profits: Faith, Fraud, and the Republican Crusade for Values Voters.

Being an insider on the topic guarantees no particular insight, Posner says in her defense.

Steven Strang, founder and publisher of the Pentecostal magazine Charisma, has churned out no less than three books on the subject since Trump’s election (God and Donald Trump, Trump Aftershock, and God, Truth, and the 2020 Election: Why He Must Win and What’s at Stake for Christians if He Loses). Posner, who quotes Strang, dismisses his books as works of advocacy rather than analysis or, as she writes, “hagiography.”

Not so Posner’s take. For her, Trump is “a biblically illiterate libertine” and a “pagan king.”

And yet, incongruously, Trump has been embraced by the evangelical cohort of the faithful.

“The vast majority of white evangelicals are all in with Trump because he has given them political power and allowed them to carry out a Christian supremacist agenda,” Posner writes, which is “inextricably intertwined with his administration’s white nationalist agenda.”

Thankfully, Unholy is not a superficial, quick-and dirty take like Michelle Goldberg’s Kingdom Coming: The Rise of Christian Nationalism. Posner’s entry makes a helpful and complementary companion volume to Frances Fitzgerald’s recent, magisterial book, The Evangelicals: The Struggle to Shape America, which covers some of the same territory.

Unholy’s primary value is its personal, on-the-scene interviews, and historical context. It documents in dense, meticulous—sometimes excruciating—detail the worst fears and suspicions of those who believe in the constitution’s separation of church and state.

Posner examines how Trump’s crusade for “religious freedom” and “conscience” is simply a dog whistle for undermining hard won reproductive and LGBT rights.

Carried to its logical extreme, this theory would enable a Jehovah’s Witness employer to deny coverage for blood transfusions to workers; or a physician who is an adherent of the white supremacist Identity Church to refuse to treat African American patients.

And the mutually cynical Trump-evangelical alliance has extended its malign influence well beyond U.S. borders.

“Under the cover of protecting ‘Christian’ values, the Christian right has enmeshed itself in the global wave of right-wing authoritarianism, and evinces admiration for the same nativist despots who have inspired the alt-right.”

So Trump allies in places like Hungary speak in their own code: When they say “Soros,” they mean “Jews.” They are simply updating the operative code word used by their vile antecedents, who preferred the term “Rothschild.”

And then there is the central issue: race.

“Trump’s white evangelical supporters make up an army of partisans decades in the making,” Posner writes, “and they will not quietly retreat in the face of defeat . . . For Trump’s white evangelical supporters, defending him became indistinguishable from defending white Christian America . . . In defending Trump from criticism, religious right leaders have given moral cover to the president’s racism and white nationalism.”

There is no definitive, statistically driven answer to that question because as poll takers point out, racism is something people rarely acknowledge in surveys.

However, this much, which Posner correctly points out, is inarguably true: There is a hard, racist segment—perhaps the core—among grass roots white evangelicals. They form one of the reliable components of the hooded wing of the Republican Party.

Notwithstanding, several spontaneous manifestations of this racism even caught some white evangelical leaders off guard.

First came the visceral opposition to the Black Lives Matter movement, especially to the 2012 shooting of Trayvon Martin, an unarmed African American teen in Sanford, Florida. Black evangelicals were stunned by what they felt was a betrayal by their white co-religionists.

Then in 2013 there was the negative reaction to the proposed, bipartisan, immigration reform proposal, and subsequent efforts, each providing a path to citizenship to the undocumented. Much like their African American co-religionists, Latino evangelicals were shocked and hurt as white evangelical leaders who initially supported immigration reform shamefully hastened to retreat to their recalcitrant base.

In the same vein, many white evangelical leaders—who backed more traditional candidates in the 2016 Republican presidential primary—were then shaken by Trump’s sudden rise in the contest.

“The more [Trump] called for a wall or for banning Muslims, or lambasted ‘elites’ and ‘political correctness,’ the more he cemented his standing with white evangelical voters,” Posner writes. “Finally evangelical leaders relented and acknowledged what the voters they had so carefully groomed to be ‘values voters’ apparently wanted a wall builder, a rule breaker, and most important, a strongman.”

When Trump won, evangelicals were richly rewarded for choosing expedience over principle.

“Although evangelicals constitute far from a majority of Americans, the president’s bottomless support for them has enabled the Christian right to dictate administration policy, creating a tyranny of the minority that they see as a divine assignment and a last chance to save America.”

Later, these same evangelicals rallied to Trump’s defense when impeachment threatened, calling the Congressional effort an attempted coup, aimed at “overturning the election.”

But if impeachment is somehow a “coup,” an overturning or overthrowing of the election, why did the Founding Fathers put it in the Constitution?

So as the 2020 election approaches, is Unholy a worthwhile addition to this sagging book shelf of attacks on conservative, white evangelicals? Does it say much on the subject that is new? Unfortunately, not so much.

While deeply researched and eloquently written, Posner doesn’t tell casual observers something they don’t already know, or could reasonably predict.

But worse, the sad truth is that no amount of editorial huffing and puffing will bring down Trump’s house, his base of white evangelical support. His handling of the novel coronavirus pandemic may be another story, perhaps for another book.