The Unfortunate Importance of Beauty: A Novel 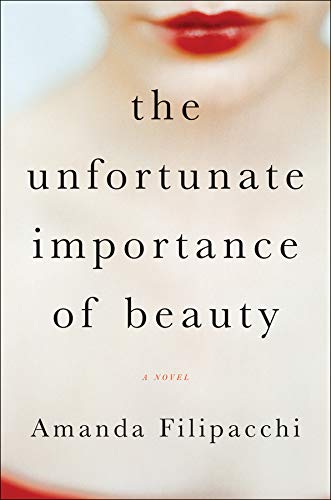 “There is power in beauty. That’s the tragedy of it.”

You have to get to the middle of Amanda Filipacci’s newest novel, The Unfortunate Importance of Beauty, before you reach these lines, but they serve as a neat thesis statement for the book.

Set in contemporary New York City, The Unfortunate Importance of Beauty is Filipacci’s take on the thorny question of beauty and its place in society.

Protagonist Barb is a stunningly beautiful woman, devastated by the loss of a good friend whom she did not realize was in love with her. To negate the effect of her beauty, every day she dons a fat suit and gray wig (along with other “ugly” acoutrements). Her opposite number is her friend Lily, a woman whose appearance is described as “. . . extremely ugly—the kind of ugliness that is inoperable.” Thank goodness Lily is a tremendously gifted musician, able to influence anyone to like anything . . . except her own looks.

Along with their cadre of similarly “quirky” friends, Barb and Lily have zany adventures involving a murder, an attempted murder, staged fights in an old folks home, and magic. We never know very much about any of the characters, but they sure do a lot in a mere 332 pages.

And therein lies the central problem with Filipacci’s novel: a startling lack of depth of either story or characters. The author is clearly a competent writer, capable of thoughtful observations like: “We think we know people. We think that what we see is all there is. We rarely ask ourselves what goes on behind the curtain. We jump to conclusions. And we take everything very personally.” It’s frustrating, then, that similar promise is buried in a clunky mess of frantic action, stilted dialogue, and flat characters.

Even, or perhaps especially, Barb is one-dimensional. Whiny, self-important, and bossy, she is a pale cousin of Jane Austen’s Emma Woodhouse, the difference being that Emma has flashes of humanity that make her likable. She also grows and changes over the course of Austen’s novel. Not so with Barb. When she eventually gives up her fat suit, it is not so much from personal growth past her disguise but capitulation to “fate,” which happened to toss an attractive, eligible man in her path.

Each other character is a one-quirk pony: Penelope uses a six-year-old near disaster as excuse for stagnation . . . and she makes really bad ceramics. One particularly cringe-worthy bit of dialogue describes her best: “You’re psychologically broken, like one of your pots.” Georgia is a wildly successful writer who thinks she’s awful, so she takes her computer everywhere, even to the symphony. Jack is an ex-cop who breaks up pretend fights at an old folks home because his limp prevents him from working any longer (it’s never explained exactly why a limp precludes being an officer). All are mid-twenties, with fabulous careers (and/or rich parents).

This is pretty much what the reader is given about the cast—all presented in info dumps or in dialogue that reads not so much as conversation as it does a series of mini-monologues. The characters are not people but quirks with names.

Filipacci is clearly shooting for an incisive look at beauty and its skewed place in our society, through the lens of Voltaire-like farce and fantasy. “As long as women are dissatisfied with how they look, I’m satisfied. I don’t care what form their dissatisfaction takes, provided it requires me to fix it,” gloats a plastic surgeon, late in the novel, and though it is perhaps a neat statement, it’s demonstrative of the heavy hand and grand statements that proliferate in The Unfortunate Importance of Beauty.

There is a lot of action in the novel, but much of it is “sound and fury, signifying nothing;” the characters jump from one zany adventure to another as a means to demonstrate their oddity and say a word or two about how horrible it is to be beautiful. Or not beautiful. Or indifferent to beauty. There is some humor to it all, but it’s brittle and eventually exhausting.

It appears that Filipacci is attempting to take a page from John Irving (or more likely Wes Anderson, Irving’s cinematic doppelganger) in putting impossible people in improbable circumstances; unfortunately, she lacks Irving or Anderson’s ability to make those characters live and breathe—to have a quirk rather than be a quirk.

There is an aspect of misandry to The Unfortunate Importance of Beauty, as well, and this is troubling. Throughout the novel, men are continually presented as shallow, beauty-obsessed creatures, almost without exception. Even Barb’s eventual paramour isn’t so much swayed by her personality or Oscar-caliber costume designs, but is in hot pursuit of her looks under her fat suit. The one man who is able to break out of that mold is introduced at the end of the novel, in itself strange, and is almost angelic: another non-human.

“It took being on the verge of discovering the truth to perceive it was already in me,” muses Barb at the end of the novel, when she capitulates to love and finds peace within herself. She loses her suspicion of men, accepts her beauty, and moves forward.

Ms. Filipacci’s apparent mistrust of beauty is not as neatly solved, though she struggles through this novel to do so. Perhaps she’s too close to the subject in The Unfortunate Importance of Beauty to be objective. There is no understanding to be found here; instead there are silly people and situations, ending in improbable hearts and flowers. Unfortunate, indeed.