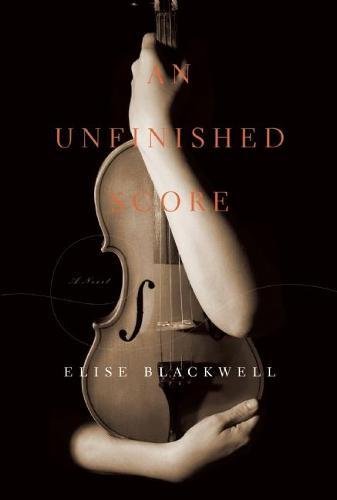 An Unfinished Score begins with our viola-player protagonist, Suzanne, learning about her lover’s tragic death from a radio announcement as she’s having dinner with her composer husband, Ben. Stunned, she must hide her feelings and act as if nothing is wrong. During the coming weeks, as she goes on with her daily routine, we get past snapshots of her illicit relationship with her lover, the well-known conductor, Alex Elling. Suzanne keeps the secret to herself, hiding the truth even from her best friend, Petra.

Then one day she receives a strange call from Alex’s widow, a call that brings an unexpected twist into Suzanne’s quietly desperate life: the widow claims that Alex has left an unfinished concert for Suzanne. . . . Is this true? Who is to finish the score? Who gets to play the concert? And for what reason?

Thus begins the dark relationship between Suzanne and her dead lover’s widow, a relationship that sends Suzanne into inner turmoil and ultimately into public humiliation.

There are many positive things to say about this novel. It is obviously well researched. The world of musicians, composers, orchestras, and string quartets comes alive. In this respect, the author has done her homework, and classical music fans will enjoy all the references to music and facts about the ins and outs of the musical world. As a norm, it isn’t easy for a non-musician author to write convincingly about musician characters, yet the author has accomplished this with flying colors. The sentences flow beautifully and at times the prose has some great moments. There is a genuine, realistic aspect to the characters and their insipid and unpleasant lives. Also worth noting is Suzanne’s submersion into her fantasy world, the tortuous state of her mind not only because she’s lost Alex, but because she’s now left with nothing but her dull, ordinary existence.

That said, the novel does have its share of flaws. First, there are so many mentions and allusions to music and composers that the story flow drags and gets bogged down with details. Second, in spite of Suzanne’s predicament, she’s not sympathetic enough for the reader to care; in fact, none of the characters in the book are particularly likable. The novel is lacking in this important aspect, thus affecting the reader’s ability to be concerned with the outcome. Third, Alex’s widow comes out as the stereotypical “evil ex-wife” and her conversations with Suzanne often sound stilted.

In spite of this, An Unfinished Score will be of special interest to musicians—especially viola and violin players—and lovers of classical music.