Undoing Time: The Life and Work of Samuel Beckett 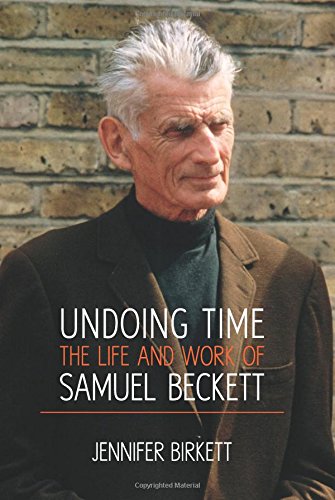 For Jennifer Birkett, Emeritus Professor of French Studies at the University of Birmingham, Samuel Beckett thought “life was a matter of doing time, while writing was a way of undoing it.”

In her new monograph, Undoing Time: The Life and Work of Samuel Beckett, Birkett investigates the concept of doing and undoing time in Beckett's work. She looks at Beckett's poetry, novels, and theatrical works. Her work also focuses on Beckett's fiction with media like radio and television.

Works of literary criticism on Beckett focus on matters like James Joyce's literary influence, the Irish-ness of his work, and the intense minimalism.

Birkett focuses these subjects through the lens of time. Waiting for Godot is seen as a confrontation with the boredom of human existence. Vivian Mercier famously criticized Godot as a play where nothing happens twice. Instead of contradicting Mercier's criticism, Birkett celebrates this nothing happening on stage. While other critics have characterized Beckett's work as a long-term project of subtraction, Birkett pushes this further by exploring how this subtraction effects how the work is consumed and appreciated by the audience. Instead of transporting the audience to a fantastic place of adventure and escapism, his works lays bare the futility, failure, and tedium associated with everyday existence.

Life is a prison with no chance of escape. In Godot, this is farcical and burlesque, while in Endgame, the characters lash out at each other, only to realize that it solves nothing. Whether comedic or cruel, life is nothing doing.

Beckett's literary and theatrical career flourished in the postwar era, despite producing these confounding confrontational works. Confrontational, not in an adversarial sense, Beckett used the theater to challenge the audience's expectations. His Play Without Words I and II are not about mimes performing comedy but Beckett exposing the audience's culpability as a co-participant in an act of sadism. Beckett understood the slightest shift in emotional tone could change farce into tragedy. When the audience finally realizes the cruelty of the mime's situation, laughter stops and it becomes confused embarrassment.

Other noteworthy topics explored include Beckett's treatment of gender. Works like Play and Footfalls exhibit humanity's savage and inescapable co-dependency on each other.

Plays like Happy Days and Not I receive deep readings that showcase Beckett's understanding and sympathy for women. Birkett writes about Not I, “But out of that particular space, and beyond that of gendered experience—or, rather, that experience of the loss of gender identity in old age—Beckett has created an extreme image of the situation of many impoverished old women, in many places, unseen and ignored, and in the last analysis, an image of destitute humanity everywhere.”

Circling back to the theme of doing time, Beckett staged Not I as a piece of music. The speed of narration and fragmented phrases make the piece more like modernist music than a play. Not I has the propulsive, forward-moving rhythm of original Dr. Who theme. Words get pushed out through a hole, except that the hole is the actor's mouth.

This is not a straightforward biography, but an academic monograph. It would be of interest to both Beckett scholars and amateur Beckett enthusiasts. Birkett explores how Beckett wrestled with the idea of existence as doing time, both in a literal and figurative sense. The onward march of time confronts humanity, creating failure in its wake. Beckett, through his life and work, sough to escape the ravages of time not by avoiding failure, but by embracing failure. Each time, he tried to fail better.