Undisclosed Files of the Police: Cases from the Archives of the NYPD from 1831 to the Present 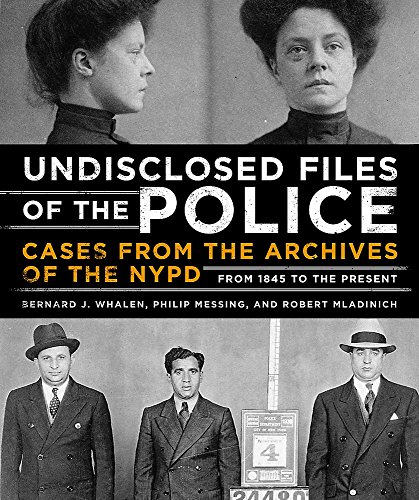 “The only criticism that fans will have is that Undisclosed Files is not twice or three times as long. One is left wanting more.”

“Undisclosed Files also takes an unbiased look at individuals on both sides of the law. This includes great cops, such as the first NYPD chief Thomas Byrnes, the originator of the Third Degree, who compiled a massive book of mug shots and bios of a who’s who in New York City criminals. . . But it also doesn’t shy away from crooked cops, the worst being Lieutenant Charles Becker, who went to the electric chair at Sing Sing for his role in the murder of a Manhattan gambler.”

Each crime and its investigation is described in brief, but surprisingly detailed summaries, accompanied in most cases by crime scene photos. Those readers with delicate stomachs be warned: Crime scene photos are graphic.

Beginning with a brief bio of Jacob Hays, High Constable, appointed in 1802, and “considered New York’s first real detective,” Undisclosed Files traces the many changes to the NYPD over the decades.

Although such famous cases as the murder of Stanford White by Harry K. Thaw at the old Madison Square Garden in 1906 over White’s seduction of Thaw’s wife, Evelyn Nesbit, reputed to be the most beautiful woman in America, are covered by the authors, many other equally senseless but less well known crimes are included in the history.

One such case that many readers may not be familiar with is the murder of Helen Jewett in 1836. An attractive 23-year-old prostitute from Maine, Jewett is an intelligent young woman, but not intelligent enough to avoid a store clerk named Richard Robinson.

A button clutched in the hand of a murder victim that leads to the murderer is a well-worn clue in many mysteries, but a cloth-covered button lead to the arrest of three men guilty of a string of burglaries in “The Button Case” in 1848.

One interesting chapter concerns the fight, often physical, between the Municipal Police Department and the Metropolitan Police Department. The Municipals were controlled by Democrat Mayor Fernando Wood and Tammany Hall. Wood’s friends were usually given a free ride where criminal acts were concerned. The Republican-led state legislature created the Metropolitan Police to replace the Municipals. Soldiers from the Seventh Regiment quelled a pitch battle between the two departments.

Another chapter concerns Theodore Roosevelt and his tenure as president of the four-man police board charged with rooting out the corruption in the NYPD. In 1894, a series of hearings that “revealed the department was rife with corruption, especially in its handling of vice crimes such as gambling and prostitution, and its enforcement of the blue laws.” Roosevelt instituted many reforms, but was not popular with those officers who saw his actions as “meddling.”

Among other cases covered in the book is “The Murder of Dolly Reynolds” in 1898. Although the evidence was conclusive in the minds of the detectives, the accused, a slimy dentist named Samuel J. Kennedy, managed after three trials and an appeal to escape justice as did Richard Robinson in the Helen Jewett case.

“The Barrel Murder” illustrates the difficulty the police had to arresting and convicting members of The Black Hand, precursor of the modern Mafia, while “The Chinatown Trunk Murder” in 1909 is another example of politics interfering with justice. "In January 1910, a new administration took charge of the Police Department. It wanted distance itself from the embarrassing episode and let the matter quietly fade away . . .”

Terrorism in New York City didn’t begin with the World Trade Center bombing in 1993. In 1914 an element within the Black Hand known as “the Circle of Brencia” attempted to bomb St. Patrick’s Cathedral. The Wall Street Bombing in 1920 killed 39 people and injured another 200. No one was ever convicted.

No history of New York City crime is complete if it doesn’t include the mysterious disappearance of Judge Crater in 1930. Did he do a runner because he paid Tammany Hall a $22,000 bribe for his appointment to the bench, a common occurrence in those days? Or was he murdered? No one knows because there has been no trace of Judge Crater in 86 years.

Other famous cases included in Undisclosed Files are George Metesky, the Mad Bomber, in 1940; Julius and Ethel Rosenberg, who gave away atomic secrets to the Russians in 1949; the stabbing of Martin Luther King Jr. in 1958; gang warfare; the many crimes of John Gotti; David Berkowitz, the Son of Sam; the murder at the Met of Helen Hagnes Mintiks in 1980; the murder of John Lennon; and of course, the bombing of the World Trade Center in 1993, and the horrific terror attack on 9/11.

The authors, two retired cops and a crime reporter, paired meticulous research with good choices of cases to include in Undisclosed Files. Fans of true crime will be familiar with most of the cases, particularly the latest ones, but certain others that occurred in the 19th century may be new.

The only criticism that fans will have is that Undisclosed Files is not twice or three times as long. One is left wanting more.