Underworld: From Hoboken to Hollywood 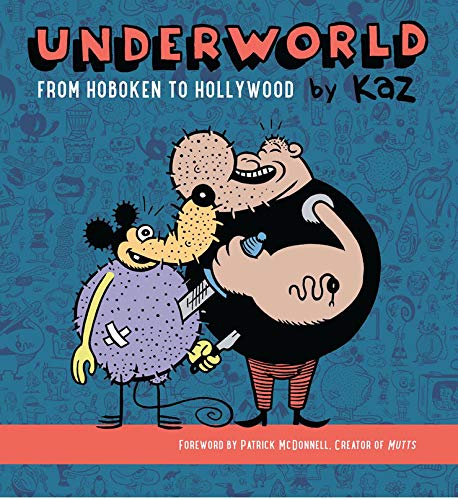 Patrick McDonnell, creator of Mutts, describes Underworld as “outrageous, demented, perverted, and politically incorrect, but somehow it's also charming, endearing, compelling, and 'cute' in its own twisted punk way.”

Underworld was conceived by Kaz (Kazimieras G. Prapuolenis), a Hoboken native of Lithuanian extraction. He came from a working-class background and crashed in New York City during the seventies and eighties. Kaz's vision smashes together underground comix like those made by R. Crumb with an angular punk rock sensibility. Kaz's visual style reflects the influence of other punk comix artists like Gary Panter (Jimbo) and Mark Beyer (Agony). Like Panter and Beyer, Kaz appeared in the cult magazine RAW.

Junkies, prostitutes, transvestites, and criminals populate Kaz's comics, yet it has the hokey wordplay of newspaper strips. Most strips obey the formula of set-up, gag, and punchline. In its own peculiar way, Underworld occupies a comedic realm similar to Arrested Development. Both mix a childlike innocence with an erudite vulgarity. It also helps that some strips are laugh-out-loud funny.

The Underworld world began in 1992 and continues to this day. In the early days, Kaz had only two characters: Snuff and Creep Rat (see cover). Laurel and Hardy meet Vladimir and Estragon in a post-apocalyptic New York City dystopia. Then Kaz brought out more characters: Nuzzle the Junkie, Newton, Petit Mort, and others. Since the strip is published in an alternative newspaper, Kaz has the freedom to change the strip's title or simply drop in pages from his sketchbook. A fine balance preserves the rigid formula of the comic strip joke with the anarchy occurring on the panels.

To take a random four-panel strip, the first panel has Nuzzle the Junkie attempting to commit suicide by hanging himself. The doorbell rings. “Damn! Come in!” “Hello Nuzzle,” Nuzzle's girlfriend says, “I want my rope back. And my chair. And my oven, my gun, my razor, and my sleeping pills.” The third panel: “I'm breaking up with you!” she says as she slams the door. On the final panel, Nuzzle says, “And I thought we were so happy.” (And this was one without unprintable four-letter words.)

Other strips operate with a seamless visual grammar. One titled “Underworld: Evolution,” has a fish swimming out of the ocean, crawling up on the sand, wheezing and coughing. The third panel has the fish taking out a cigarette. On the last panel, the fish sits on a rock smoking a cigarette. Like unfiltered cigarettes and bottom-shelf vodka, Underworld is an acquired taste.

Yet for all of Underworld's lowbrow bad behavior and casual violence, Kaz is now a purveyor of pop culture aimed at younger audiences. Kaz has worked as a storyboard artist for cartoons like SpongeBob SquarePants and Phineas and Ferb. Both shows possess Kaz's anarchic sensibility, but also respecting the vision of the specific showrunner. Fantagraphics has given Kaz's work a beautiful presentation, including reprints of color covers. Snuff and Creep Rat probably wouldn't appreciate it, too busy thinking about their next crazy scheme.