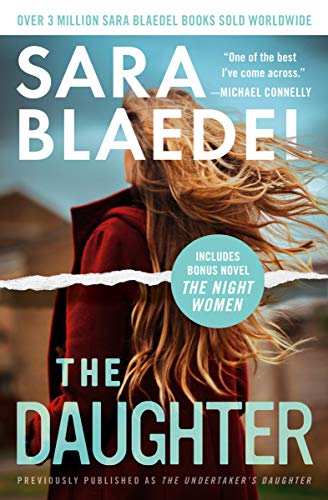 “one of the year’s most fascinating novels . . . The Undertaker’s Daughter is a wonderful read.”

Denmark’s most popular mystery writer creates a new series with a very unusual setting: a funeral home in Racine, Wisconsin. Sara Blaedel not only tells more about how a mortician prepares a body for burial than one might want to know, but she describes the whole process of burial practices in America, and seamlessly weaves the information into the plot in a factual and realistic manner without grotesque undertones.

Already 40, widowed and childless, moderately successful school photographer  Ilka Jensen lives a quiet life in Copenhagen until a bombshell of expected news blows apart her rigid world. Her father, who abandoned Ilka and her mother, Karen, when Ilka was seven, has reappeared in his daughter’s life in the form of a telegram announcing his death.

Karen is desperate to persuade Ilka not to claim her inheritance: a funeral home in Racine, Wisconsin. “. . . we don’t know what he’s left behind. He could be up to his neck in debt . . . If you go over there, they might hold you responsible for his debts. And who knows? Maybe they wouldn’t allow you to come home.”

Ilka’s father, Paul had won a million crowns 33 years before and disappeared, leaving his daughter and wife with a failing funeral home and knee deep in debt. Neither heard from him again for several years until a letter arrived asking for a divorce. Although Ilka had written her father numerous letters for the years, he never replied. “. . . Paul’s daughter had tried to reach out to her father all her life, and it was only now that he was gone that he was finally reaching out to her.”

Despite her mother’s misgivings, Ilka flies to Racine where her father’s partner, Artie Sorvino, meets her and drives her in a hearse to her father’s funeral home. On the way Artie tells her that her father had married and had a wife and two daughters. No one knew Ilka existed until Paul’s will was read.

Artie is an artist, but became Paul’s partner to do reconstruction of the deceased who might arrive at the funeral home in less than recognizable condition. Give Artie a photograph, and he will make the corpse look like itself again.

When the local hotel fails to find a booking for Ilka, she decides to stay in her father’s room on the second story of the funeral home. “A feeling suddenly stirred inside her, and she froze. He was here. The smell. A heavy yet pleasant odor she recognized from somewhere deep inside.”

Memories of her father come rushing to mind, memories she has forgotten. She finds a picture on his desk of her two stepsisters. She feels sick with jealousy. “They had grown up with her father, while she had been abandoned.”

She finds her letters that she had written her father over the years. He had kept every one, but for some reason never bothered to reply.

The morning after her arrival, her father’s receptionist/assistant, Sister Eileen O’Connor, informs her that a grieving family is waiting downstairs, and she must go meet with them about arrangements. Totally disorientated and unprepared, Ilka muddles her way through with meeting with the Norton family in which Grandma’s prepaid funeral is discussed with Ilka having no idea what anyone is talking about. She promises the family a certain kind of coffin, light-headed to learn that coffins in America might cost as much as seven thousand dollars.

“What is this? Ilka thought. Are coffins here decorated in gold leaf?”

Ilka’s problems, arising from ignorance of funeral practices, only escalate. A feud with a rival funeral home, a body removed from its coffin, the strange and sinister encounters with men representing a national chain of funeral homes, a potter who does clandestine cremations in her kiln, and a murder suck her into a quagmire of danger.

The national funeral home chain demands to buy Ilka’s mortuary and threaten her when she refuses. Sister O’Connor may not be as straight arrow and honest as she claims to be, and her stepmother and stepsisters want nothing to do with her.

But more worrying than any other problem is the murder. Who did it? Why did they do it? What, really, does the murder have to do with her? In the meantime she continues trying to get a handle on the funeral business as practiced in the United States. As she meets with another family she remembers Artie’s advice: “He had told her what to focus on: coffee, kringle, and Kleenex.”

In addition to describing the funeral business, both the pen-and-paper side, and the embalming-the-deceased side, Blaedel also infuses the narrative with subtle humor. Ilka is a delightful, likeable character, with whom one may identify even though her hastily acquired business is not one most would care to be involved.

The plot is convoluted, the characters complex, and the setting unusual. The Undertaker’s Daughter functions as a long setup to a lengthy mystery yet to be solved. While some questions are answered in this first volume of Blaedel’s new series, the book itself ends in a cliffhanger.

“And she realized it was too early for her to go home, with so many facts that didn’t add up, so much left unsaid, so many things till a mystery to her.”

This is one of the year’s most fascinating novels, and no one who is a fan of mysteries or suspense should miss out on The Undertaker’s Daughter, excepting those who want everything tied up in a red ribbon by the last page. That doesn’t happen, but like the Star War movie series, one should save a place in line for the next installment. The Undertaker’s Daughter is a wonderful read.