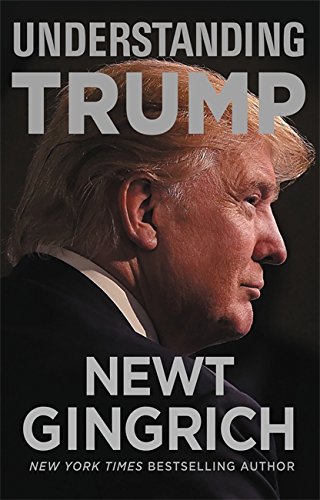 “Understanding Trump is one of those books that can be quickly pasted together and sold in an airport bookstore. . . . a happy meal for those who voted for Trump in November.”

Maybe the first important decision a presidential candidate makes is selecting their running mate. At one time Donald Trump considered Newt Gingrich for his vice president. This political equation which didn’t happen still places Gingrich in a good position to help us understand the man who is now president of the United States. Newt Gingrich is not a novice to American politics. Gingrich often speaks with authority even if at times he is combative and controversial.

Understanding Trump is one of those books that can be quickly pasted together and sold in an airport bookstore. This is a happy meal for those who voted for Trump in November. For the open-minded American who wants to understand our new president this is merely an appetizer. Gingrich in his book seems to be fascinated by Trump’s personal achievements and style. He underscores that Trump is an entrepreneur and not an academic. Trump’s own The Art of the Deal is where Gingrich gets much of the material that shapes the beginning of this book.

Understanding Trump is a sandwich with one piece of bread. By claiming the best proof of Trump’s character can be measured by the success of his children is like determining the weather simply by going outside. One has to question where this book is going after Eric Trump writes in the foreword that when it comes to his father, “there is no greater man.”

If one wants an understanding of Donald Trump it should be done in an honest and critical fashion. Gingrich best moments in this book comes when he is talking about how Trump was elected and how he successfully used the media.

Gingrich is correct when he states, “Trump doesn’t just understand the media he masters it.” The weakness of Gingrich’s book is when he falls victim to writing about the terrain of American politics. There is no need to rehash anti-left rhetoric. Gingrich needs to avoid being like Kellyanne Conway. When your candidate wins an election behave with some degree of dignity.  At the end of the day the focus should be on the welfare of our nation.

Chapter Seven of Understanding Trump is a key chapter. Gingrich writes: “Part of the reason Trump and his message were so successful in the 2016 election is that America is undergoing a Great Transition, and Trump was the only candidate who seemed aware of it.”

Now that Donald Trump is President Trump he must embrace “The Great Transition.” Gingrich is again correct when he mentions how today’s world is different from the one that came after the end of World War II. Trump wants America to place American workers first when it comes to economic policies and decision makings.

If Gingrich could get pass the gushing of “knowing” Trump this would be a better book. One needs to be careful when talking about patriotism and the working class. At the end of the day it’s not about “slogan unity” but instead working together.

The last chapters of Understanding Trump reads like a slight misunderstanding of American history. Reducing our conflicts to battles between the left and right wing overlooks the fact that our nation has always been governed by its center. If Gingrich believes the left is cornered but still dangerous, what is the danger? The guiding principles of the modern left doesn’t repudiate American history.

It’s ironic that Newt Gingrich in his book would highlight the beliefs of Martin Luther King Jr when its suitable but ignore the fact that during King’s entire life his views were met with opposition by white conservative southerners who advocated the rights of States. Is this the American history that makes us all Americans?

At the end of Understanding Trump one finds Newt Gingrich struggling to compare himself to Alvin Toffler. He wants one to imagine what it might be like in 2026, the year our nation celebrates its 250th anniversary. If a Trump administration is successful then many of the things on the G-list will have happened. On the wish list is the establishment of a permanent base on Mars. In 2016 one can only wonder if Mars will have to come to us first. President Trump has had a difficult six months; he is trying to understand the presidency and many of us are trying to understand him. Newt Gingrich has given us a basic book about Trump and his plans. After reading it one might ponder a statement Martin Luther King, Jr once made: “Where do we go from here, chaos or community?”

E. Ethelbert Miller is a writer and literary activist. His most recent book is If God Invented Baseball. In April 2015, Miller was inducted into the Washington DC Hall of Fame.