Understanding Emotional Intelligence: Strategies for Boosting Your EQ and Using It in the Workplace 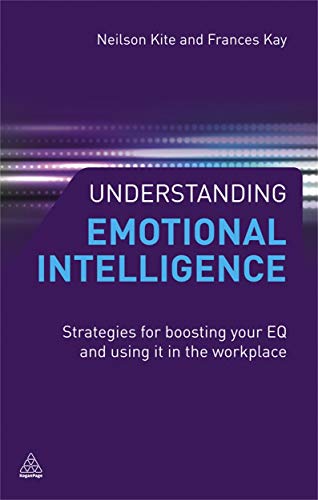 “All this—and there’s plenty more, replete with examples and case studies—makes Understanding Emotional Intelligence a comprehensive source of insight and information for people who want to be well thought of. . . . It’s not science but—like people themselves—this exploration of emotional intelligence is interesting, enjoyable, and even somewhat enlightening. . . . People with relatively little EI, unfortunately, will probably wonder what all the fuss is about.”

Emotional Intelligence has been contemplated, discussed, and studied in great detail since it began to be recognized as a standalone capability, nearly 100 years ago. According to the authors of this book, Neilson Kite and Frances Kay, it came into prominence as a discrete area of study in the 1990s, and their clear implication is that both the topic and the skill are now ready for prime time.

Rather than get into the nuts-and-bolts of what it is, how it works, or who has it and who doesn’t, the authors focus on the practical use of emotional intelligence (more specifically: “emotional-social” intelligence) to improve the outcomes you obtain in everyday situations.

Because their view of emotional intelligence (EI) is so down to Earth, they consider EI a more “reliable indicator of likely success” than other, more traditional measures of intelligence. They also believe that EI can be developed and strengthened through personal observation, learning, and experience.

Most importantly, they believe that EI is not a separate form of intelligence, but one that is integrated closely with what they call “intellectual thought”—as well as with various other forms of intelligence, from linguistic to kinaesthetic and beyond, although perhaps this integration occurs primarily at the subconscious level—and contributes mightily to our decisions, actions, and outcomes.

Among the most interesting pronouncements in this book is the correlation of relatively high EI with a variety of other personality characteristics. These include:

I’m no scientist, but I have the strong feeling that science would be hard put to “prove” these characteristics are always associated with EI. In fact, I’m guessing that the authors simply make the assumption that people with these values intrinsically possess more EI than people with the opposite values. Why? Because on page 30 the authors explicitly state that EI “has an emotional component for which there is no totally accurate means of measurement.”

If they can’t measure EI, they certainly can’t state what personality characteristics are most closely associated with it.

But that doesn’t mean the book is worthless.

For example, the authors offer exercises designed to improve the reader’s self-awareness. They discuss how to improve one’s self-confidence. They put forward some basic rules on how to get along with others (Observe boundaries, Keep promises, Have respect, etc.). They lecture on the benefits of social awareness. They meditate on the challenges of male-female interactions and list suggestions on how to overcome misunderstandings caused by gender differences.

They also enlighten their readers on the four basic stages that mark awareness of others: denial, recognition, puzzlement/disappointment, and acceptance/collaboration.

The book contains additional information on leadership, on team play, on successful selling—and particularly on successfully selling yourself.

All this—and there’s plenty more, replete with examples and case studies—makes Understanding Emotional Intelligence a comprehensive source of insight and information for people who want to be well thought of.

One of the most interesting sections covers persuasiveness in business, which helpfully includes sales, negotiations, and even courting investors.

Because the book is focused on outcomes more than theory, the authors have identified and probed the potential for using EI in dozens of specific business and personal cases, from “the impossible boss” to bullies, blamers, and disrupters. In a bow to modern times, the authors have also crafted a chapter that shows how EI offers advantages within the world of social media.

And while they explicitly admit that EI cannot be measured accurately, the authors close this book with a 17 item list of “basic characteristics” useful in assessing your EI, along with a specific multiple-choice test that purports to put an objective score on any test-taker’s level of EI.

Perhaps the most fun in the whole book comes from a subjective evaluation in which the authors ask you to describe various objects and scenes within an imaginary experience, and then suggest you correlate your descriptions of these imaginary elements with your emotional take on actual elements in your life, such as your home life, your career, your fears, your partner or spouse, and even your future.

The main question I have for the authors is: Exactly how much benefit do they expect people who are short on emotional intelligence to get out of this book? My guess is: in the same way that people with a taste for poetry may enjoy a book of good poems and people without such a taste probably won’t, people with a fair level of emotional intelligence will learn something helpful from what’s in this book. People with relatively little EI, unfortunately, will probably wonder what all the fuss is about.