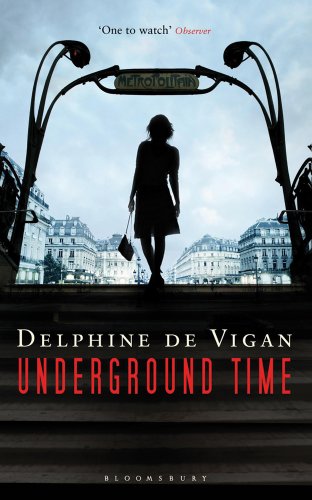 “Because Underground Time’s prose largely lacks the delicious density of the best literary fiction in translation, it appears to target a middlebrow readership. But readers with highbrow tastes may want to make an exception to their usual literary fare on account of its social criticism.”

It has been widely observed that the economic excesses of the first decade of this century have parallels in the early decades of the previous century. Likewise Delphine de Vigan’s novel Underground Time reveals the psychological working conditions endured by 21st century corporate middle management employees and the loneliness, isolation, and anonymity of contemporary urban life in much the same way that Upton Sinclair’s The Jungle exposed the hazardous working conditions of slaughterhouse workers and Theodore Dreiser’s Sister Carrie portrayed sexual exploitation in urban life a century ago.

Set in Paris and a nearby suburban office park during a single spring day with flashbacks to earlier events, Underground Time follows the parallel lives of its two protagonists in alternating chapters.

Mathilde is a 40-year-old widow and mother of three sons who works in marketing for a corporation in the suburbs to which she commutes every day from Paris via the Metro and suburban rail. She has been working for her insecure, vindictive, and tyrannical boss and mentor for eight years, but since a meeting eight months earlier at which she expressed a contrary opinion in the presence of colleagues he has through a combination of bullying and banishment gradually marginalized and excluded her from the work of the department.

The psychological toll this takes on her eventually leads to a breakdown. Skeptical readers may wonder why she did not take advantage of the diminished responsibilities during those months to look for another job and why she didn’t seek psychotherapy as her mental health declined.

Thibault is a middle-aged home health emergency primary care physician whose job consists of making house calls in Paris. English language readers will infer that in France patients only go to hospital emergency rooms for trauma; for more routine conditions they phone their health plan, and a doctor is sent to them. Between these visits, which his dispatchers assign him by cell phone, he sits in traffic and looks for parking.

He starts the day by having sex and then breaking up with his girlfriend Lila, whom he loves, because he is convinced his love is not reciprocated. Yet this decisive action renders him emotionally vulnerable, and in this state of heightened sensitivity he finds it difficult to maintain the clinical distance his job requires. He wonders if he made a mistake a decade ago when he gave up a provincial practice to move to Paris.

All day Thibault checks his cell phone to see if Lila calls or texts him, and second-guesses the decision to break-up; he wonders whether she really doesn’t love him or whether she does love him but is so introverted and mentally withdrawn that she doesn’t show it. Quiet undemonstrative readers may fault him for failing to realize that as the more extroverted partner it is his job to draw Lila out of her shell, but if he’s not prepared to sign up for such a lifetime assignment he probably did the right thing in ending the relationship.

However, Ms. de Vigan gives Mathilde’s story greater weight. By the time Mathilde realizes the mistake she has made in her relationship with her boss she can no longer repair the damage.

“She didn’t know that a company could tolerate such violence, however surreptitious.

“To permit this tumour to grow exponentially in its breast, without reacting or trying to cure it.”

She wonders if “business isn’t the ultimate testing ground for morality. If business isn’t by definition a place of destruction.”

The emotional toll of her work situation affects her interactions with her teen and tween boys. “Now it’s her sons who are protecting her, and she knows that’s not good.” One of her sons gives her a World of Warfare trading card to protect her.

One of the book’s themes is the way urban transportation enforces anonymity and dehumanizes people.

“When she catches someone’s eye, she looks away. Even when it’s busy, there remains on public transport both a certain intimacy and a sense of reserve; limits imposed on the eye since they can’t be imposed on the body.

“. . . every day several thousand people’s paths criss-cross: two columns of insects, disgorged in waves on to the slippery tiled floor, a rapid two-way street whose rhythms and cadences have to be respected. Bodies brush against one another, or avoid contact or sometimes collide in a strange sort of choreography.”

Private transportation is no better. For Thibault, “after ten years behind the wheel of his white Clio, ten years of traffic jams, red lights, tunnels, one-way streets and double parking, it seems as though the city sometimes eludes him, that it has become hostile to him. It seems to him that because it is so over-crowded and because he recognises its fetid breath better than anyone, the city is waiting for its moment to vomit him up or spit him out, like a foreign body.”

The way the third person narration alternates between the two characters’ stories—in successive chapters an entire paragraph is repeated word for word except for pronoun gender changes—creates the expectation that the two protagonists will meet and perhaps fall in love. Once or twice their paths seem about to cross but they miss each other by a matter of minutes.

[SPOILER ALERT: Ms. de Vigan’s theme of the anonymity of public transport and psychological guardedness of its passengers is brought home most emphatically in the concluding chapter when Mathilde and Thibault finally come face to face in the metro but react to each other with the indifference they would show to any other stranger.]

Because Underground Time’s prose largely lacks the delicious density of the best literary fiction in translation, it appears to target a middlebrow readership. But readers with highbrow tastes may want to make an exception to their usual literary fare on account of its social criticism. George Miller’s idiomatic British translation is quite readable, though American readers will have to infer that “washing up” means dirty dishes, and “kerb” is a British alternate spelling of the noun curb. Presbyopic readers will appreciate the book’s larger than normal font.