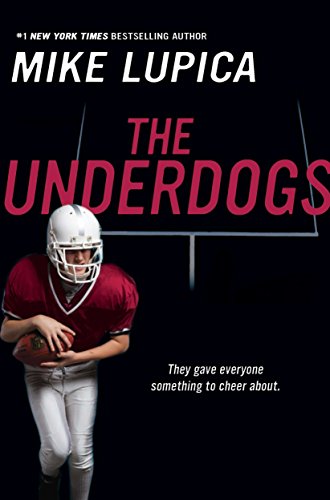 “Its familiarity and comfort level are its greatest strengths. . . . [but] we can’t help wanting more.”

If Mike Lupica’s middle-grade novel, The Underdogs, were a drama it would be called a “well made play:” structurally sound and evenly and credibly plotted with a diverse assortment of stock characters and a pleasant outcome. If Mr. Lupica intended to write a book that would be a comfortable and familiar read for 12-year-old kids, one that wouldn’t be challenging, and that would be entertaining, then he succeeded.

The Underdogs is comfortable. The characters are recognizable and authentic and nothing happens that stretches credulity. The circle of friends depicted in these pages quickly becomes our circle and our friends. Adults are all recognizable as people we’ve known and had coffee with down at the corner café. Its familiarity and comfort level are its greatest strengths.

Quite probably, though, these qualities are also its greatest weakness. We want to like it better. We want it to be not quite so predictable. We want the characters to face more daunting challenges and not have their conflicts resolved so easily. We want the emotions to be felt more deeply. We want to be surprised. But The Underdogs follows the formula to the letter.

The main character in the story is Will Tyler, a 12-year-old boy, whose only passion is football, and his dad, Joe Tyler, a former high school football player whose knee was destroyed during a game thus ending his chances of a scholarship and eventually leading him to hate football. Both live in a small working-class town of Forbes, struggling to survive after the closing of the local industry, the Forbes Flyers athletic shoe company.

Will faces a year without a football team in the West River Youth Football League. The Town Council of Forbes pulled the plug on the younger students so money could be reserved for the High School team. This is devastating to Will. Football is his life. It is his obsession. He practices diligently and does not consider it work. Facing a year without a team is unacceptable to him. As author Lupica describes it:

“. . . for the first time ever, despite how his dad and the rest of Forbes had been struggling for years, Will understood what it was like to be poor. He knew a lot of people were worse off than he was, and Will had never been one to feel sorry for himself. He and his dad had it much better that some people—most people— who’d lost their jobs when the sneaker factory closed, people who even now were looking for steady work. Will has lost his mom, and then a first home, which he barely remembered, but he’s always had football. As though the game was the one constant in his life.”

The story then follows young Will’s determined efforts to not only get sponsorship for his team but also to win the championship from his arch-rivals, the much better supported team in Castle Rock, the wealthy community across the river from Forbes. He must also make up for the previous year when he fumbled the ball near his goal line allowing Castle Rock to win. There is never any doubt that he will succeed.

One of the obstacles he faces is getting a sponsorship. He does what he calls the equivalent of a “Hail Mary pass” and writes to the shoe company that put Forbes Flyers out of business and simply asks for them to sponsor the team. The only reason we know it’s a “Hail Mary” is that he tells us.

This is the first disappointment of the novel. The C.E.O of the New Balance Shoe Company needs no further coaxing. He agrees immediately upon receiving Will’s letter. This is disappointing because it is indicative of the easy victories Will is to win throughout the book. The obstacles to his goals are just too weak to maintain interest and suspense. Further on in the book, Will must convince his father, for whom football represents the greatest disappointments in his life, to become the team’s coach. Of course, he agrees. He agrees too easily.

Then there is the girl. Hannah Grayson has just moved into Forbes. Will meets her on the practice field where she bests him in just about everything: football: kicking, passing, catching. The only thing she is not as good at is running. The author reserves that super power for Will and Will only. It is what he calls, “That gear. That extra gear that all the great ones have.” It is a gear the boy shifts into regularly, and when he does he is unstoppable.

When the team, called The Bulldogs by a vote of the members, is formed, and Joe Tyler has been too easily convinced to set aside his resentment of football and coaching. The team is, of course, short one player and, of course, they are dead set against having a girl on the team. But, of course, they give in.

Of course. One is tempted to say “Of course,” frequently throughout the story.

One of the few surprises in the book comes in the form of the father of one of the most reluctant players, Toby Keenan.

“Mr. Keenan came to most games, home and away, a permanent game face on him, one that reminded Will of a balled fist. That wasn’t the worst of it, either; the worst of it was that he yelled almost all the time. Yelled out more than even the coaches did. More than all the other parents combined.”

Dick Keenan is another of those stock characters: the former football star whose subsequent life never matches the glory of his youth, so he strikes out in bitterness at his son who can never be quite good enough. But how Dick Keenan is eventually silenced is one of the most satisfying and surprising resolutions—too bad there weren’t more of those.

It’s not that The Underdogs is totally lacking in excitement. Mr. Lupica truly comes into his own when describing the football games. The play-by-plays are fast paced, credible, and packed with the kind of excitement and suspense that one can only wish the rest of the book had. The games are visual and visceral. The reader feels part of the game—running, blocking, passing and receiving—right along with the kids. Here, Mr. Lupica is on his home turf. Here, he shines.

The fate of the Bulldogs is, as in any allegory, closely aligned to the fate of the town. And, pride in a team can lift a community’s spirits in a way unrivaled by any other phenomenon. So it is with the economically depressed town of Forbes and the underdog team that pushes ahead in spite of all obstacles toward the championship. So there is a lesson here.

In the beginning of the novel, Will longs to live across the river in Castle Rock. He knows with his talents he could thrive there. Castle Rock quarterback Ben Clark has told him as much. But by the end of the book, Will’s attitude has changed:

“He was happy now on this side of the river. He would have been a lot happier if his best friend hadn’t left here. But he didn’t want to be there anymore. He wanted to be here. With the Bulldogs. Even with Hannah Grayson. He wanted to be on the team that beat Ben Clark’s team . . . the team that didn’t have to worry about their cool uniforms or their cool turf field.”

Although there are good lessons here and it will be a pleasant enough read for young kids with a passion for football, we can’t help wanting more. The youth team is not a strong enough metaphor for the community of Forbes and the human spirit beaten down by economic hardship but yet never feeling sorry for itself and never giving up. We want characters that show how they feel rather than feelings indicated by descriptions. We need to sense more personal struggle, more hardships, more doubt about the outcome and, consequently, more triumph.