Under the Udala Trees: A Novel 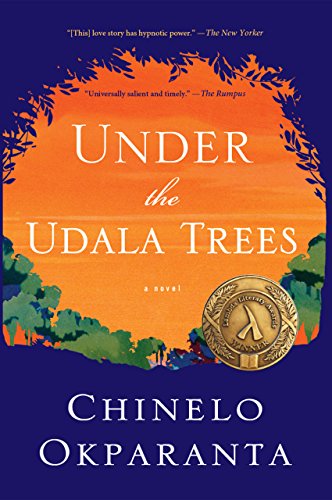 For anyone enamored of cross-cultural literature, especially those who love moving, insightful tales from Africa, Chinelo Okparanta is someone to watch. In Under the Udala Trees, a multi-layered coming of age story, she follows in the formidable footsteps of such writers as Chinua Achebe, Chinamanda Ngozi Adichie, Ngugi Wa Thiong'o, and Wole Soyinka. One does not soon forget her narrative or the way in which she tells it.

Okparanta’s protagonist, Ijeoma, is eleven years old when civil war rages in Biafra. Raised in an atmosphere of constraining religion by a mother who finds discipline easier than overt love, her life is further challenged by the fact that she has fallen in love—with a girl.

War, cultural constraints, violence from a variety of sources, and gender identity are big themes to tackle in a single story but Okparanta does so with grace, quiet conviction, hope, and courage. African folktales and songs illuminate experience at several junctures as myriad struggles of daily life in a conservative country and a family in conflict reveal themselves.

Okparanta’s first love is a young girl who turns away from her. Her second is a woman who draws her close, exposing her to the secret world of gays and lesbians in a country that sees same sex love as “an abomination.” The story couldn’t be more timely: Nigeria criminalized same sex marriages in 2014.

As a young woman Ijeoma tries to escape the control and the emotional violence of her mother, her faith, and her country by entering into a loveless marriage. She has a beloved child. But she cannot bear the lie she is living or the life she is trapped by. It takes her years to emerge as a fully formed, independent, strong woman. And it is her journey to that maturity that mesmerizes as it explores human nature, familial love, painful prejudice and ultimately the strength that comes from self-identity.

Ijeoma’s story is a sad one but it is one of hope, reconciliation, love, and courage. It is also a story of Nigerian history and culture told in often heartbreakingly human terms. Ultimately, however, there is redemption as characters find their better natures. Rising above violence, dogma, and prejudice, Okparanta seems to be saying, there can be possibility, affection, survival, and personal peace.

This story of the struggle for gender equality, for LGBT rights, for freedom from political and religious oppression in the place of one’s birth is both brave and original. It is also subtle and searing. No wonder it was named one of the Wall Street Journal’s 15 Books to Read This Fall and long-listed for the 2015 Center for Fiction First Novel Prize, among other Most Read lists. It’s another winner from an African writer to note.