Under the Southern Sky 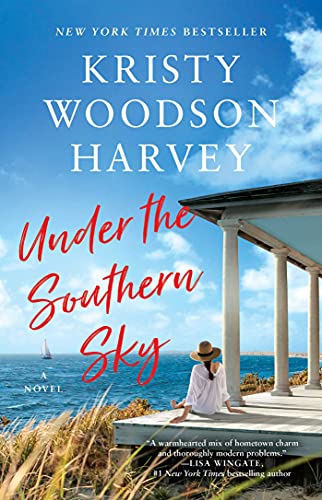 Thirty-five-year-old Amelia Paxton working at Clematis, a Southern magazine, is accomplishing her life's goals. She resides in Palm Beach, is now a top journalist, becomes an executive editor, and is married to her soul mate, Thad. Excited to discover her prized article "Modern Love" is appearing in the New York Times she excitedly rushes home to show Thad. When she arrives hoping to surprise Thad, who allegedly spends the day penning his first novel, she is the one who is surprised. Instead of writing, Thad is in fact playing house with her hairdresser, Chase. Isn't it a farce her biggest article is about love and now it all blows up in her face?

Lost and humiliated, she heads to Cape Carolina and the welcoming arms of her parents and her precious Aunt Tilley, whom she loves. The rambling childhood beachfront home named "Dogwood" always brings solace, though now Amelia notices it is falling into disrepair. The upkeep is prohibitive, and the property should have been sold years ago, but how can you sell your family's heritage, especially when it holds so many happy memories? Being back is hard and how is she going to explain she and Thad are getting divorced?

Naturally, her mom is upset, but her dad and Aunt Tilley pull no punches as to how they feel. Tilley, who is Amelia's mother's sister, lives in the west wing of the house and is somewhat deranged. Before Amelia was born Tilley had "gotten the vapors" as the Southerners describe it for tragedy hit her from which she never recovered. Because Amelia's mom will not put her in a facility, she's always lived at Dogwood. Her eccentricities provide humor as she speaks her mind with no filter, but isn't there an "odd" relation in every family?

Still living in the past, Tilley likes to dress in corset dresses with matching parasols, embracing the gentry of the South, and she believes Amelia and Parker Thaysden, their neighbor and Amelia's childhood friend, should be married to each other, not the spouses they chose.

Amelia with Parker always her biggest confidant, grew up with feelings for him, but dated his older brother and believed they would have a future until he faced a major life change and basically dumped her. Now when she sees Parker is also back home, she tells him of her current situation.

Parker understands her plight only too well for he lost his beloved wife Greer to cancer three years prior, and he still holds her in his heart swearing he will never love another, though he always had a childhood crush on Amelia.

Amelia who is not able to conceive, is working on an article about freezing embryos. She goes to a clinic to get information about the process and talks to the nurse:

"I was writing about what happens to frozen embryos once they are no longer needed.

"I wanted to talk to the parents about these fertilized eggs. Did they destroy them? Adopt them out? Donate them to science? Did they have more children because they couldn't stand the idea of do any of the above?

"'So, you only call them when it's time to make a decision?'

"She shrugged. And then she made a tiny, simple gesture that would end up thrusting my life so far off its axis that my divorce would seem like a blip on the radar. She pointed to a thick stack of paper on Dr. Wright's desk. "Yeah, once they've been in there for three years with no activity, we start calling the parents. They pay a bundle to keep them frozen, and our freezer space is always at a premium, so we try to keep on top of them.' She paused. 'But that list is the ones we can't get in touch with. After a few years of being unable to reach a contact, of not being paid for storage, we consider them abandoned.'

"She shrugged. 'That's the hard part. We don't want to destroy them or donate them for research without the parents' consent, but eventually, we're going to have to make some hard decisions.'"

As soon as the nurse left the office Amelia pounces on the list where she spotted the names—Thaysden, Greer, and Parker. With Greer deceased dead three years, what will happen to her embryos now? Amelia grapples with whether she should let Parker know about this or mind her business. She knows how much he is grieving over losing Greer, but what if he could have a part of her with her child?

Emotionally charged with despair and loss, two childhood friends unite in their pain. As time passes, they confront the binds that tie them to their families and each other accepting what is and what can be.