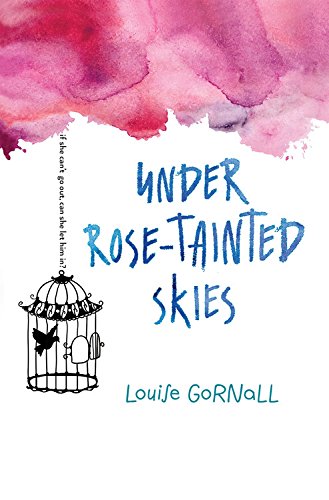 Many suffer in silence from mental illness. Since there are usually no outward appearances of the illness, most believe nothing is wrong. This is not the case for 17-year-old Norah who is dealing with agoraphobia and obsessive-compulsive disorder. She is a prisoner in her home with her whole life revolving around her malady.

Getting to her therapist's office is a chore for both Norah and her mother. Whenever Norah places a foot outside the door of her house, she practically collapses and needs her mom's assistance to get her into the car and to her appointment. Along the way, dread fills her thoroughly presenting the crushing sensation of impending death. Though Norah knows these feelings are unreasonable, she cannot help herself as her brain is short-circuiting on her.

A new neighbor moves in next door; a striking teen named Luke. Nora glimpses him from her window while she is shooing an annoying bird off the sill. Luke waves, thinking she is flirting with him, which makes Nora writhe in fright. Later when he spies her at her front door with a broom trying to drag in grocery bags left there, he comes onto the porch to help. She freezes, not only afraid of him but fearful of being considered a freak.

Norah's home is her sanctuary where she can deal with her situation, insecurities, and be herself. No known factor caused Norah to become like this, yet she manages her phobias in a disciplined manner. Panicked by germs, she washes her hands continuously, and she follows rituals for to deviate from them would, in her mind, bring a complete shutdown. In spite of being housebound, she likes to sit by the open front door to inhale fresh air and watch what is happening around her cul-de-sac.

Norah describes her fears in the following ways:

"Panic is bad. Panic mixed with disdain for yourself is worse. . . .

"The room undulates. There's no one here, but I feel like there are hands on me, pushing me around and around in a circle. My head throbs; my teeth start chattering.

"Most of the time I can ride out a panic attack. I just curl up in a ball and wait for it to pass. There's something about knowing it will come to an end that I'm certain of. Despite the way my body behaves, it feels manageable. But when it's cut with anger or rage, something shifts, and control feels further out of reach."

This is what happens after an incident passes:

"Moss has started to cover up my skin by the time this panic attack is spent. . . .

"I'm sticky, and there's this residual tremor jit-jit-jittery-bugging its way through my muscles, but it's time to stand and retake control of my limbs. I need a soundtrack, some droll overture played on the world's smallest violin, as I pull myself up and force my knocking knees to take the weight. It's like finding your strength after an intense bout of flu. I wobble across my bedroom, clinging to everything I pass, trying to make it to the kitchen because it's a couple of degrees cooler in there and/or, at the very least, I can climb inside the gargantuan fridge and ice myself off."

This situation is difficult not only for Norah, but her mother also has to learn how to cope with her daughter's anxieties. She demonstrates empathy.

Soon, Luke becomes a regular at Norah's house. He slips notes to her through the mail slot. They text, then later he brings ice cream to share while watching horror movies. Norah now envisions kissing him, even though the human mouth contains icky bacteria. She questions why he likes her when he could have his pick of any girl, and she considers herself damaged goods.

Norah suffers an unthinkable existence. Compassion and understanding are key factors while trying to comprehend her demons.

Gornall's moving account of this complicated ailment, from which she herself struggles, writes this fictionalized tale describing it in all its frightening detail. To those who never grappled with emotional illnesses, this story offers insight into the disorders. Those who do face this will understand they are not alone.