Under the Harrow: A Novel 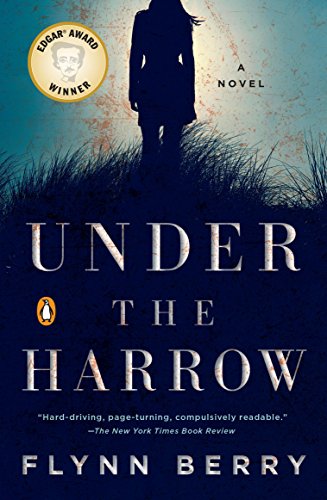 “Under the Harrow is eloquent without using overly descriptive narrative, and its psychological insight into Nora’s relationship with her sister is mesmerizing.”

A riveting debut novel, Under the Harrow by Flynn Berry is in a class by itself, whether one calls it literary suspense, psychological drama, or just a murder mystery. No recent suspense novel succeeds so well at delineating the trauma suffered by the survivors in the aftermath of murder.

Nora Lawrence takes the train from London to visit her sister, Rachel, in the village of Marlow. “I try to remember what Rachel said she would cook tonight. I see her moving around in her kitchen, shifting the massive slate bowl of chestnuts to the edge of the counter.”

When Nora arrives at Rachel’s cottage it isn’t to find her sister cooking the coq au vin and polenta. Rachel will never cook again. “. . . there are red handprints on the step above it, and the next step, and then on the landing. . . . In the upstairs hallway, the stains turn messy.”

Nora holds Rachel’s body. “I put my hand to her neck, trying to feel her pulse, then lower my ear to her face to hear her breathing.”

There is no pulse, no breathing, and Nora goes downstairs, past Rachel’s dog hanging by its leash from a post on the bannister, and calls the police. She is in shock, imagining that nothing has happened. “I wait for Rachel to appear in the doorway. Her face confused and exhausted, her eyes fixing on mine.”

Nora’s memories of Rachel shift in and out of the present. She finds herself storing up details to tell Rachel when she next sees her. Each time reality intrudes Nora is disoriented for an instant. As she tries to answer Inspector Moretti’s questions she can’t focus on what’s happening.

She asks Moretti who did it, but the police don’t know. Nora tells Moretti about the horrific beating her sister received 15 years before. The police then didn’t believe Rachel’s account of the beating, suspecting that it occurred because Rachel was trying to rob or solicit sex. No one was ever arrested, but Rachel searched for the perpetrator on her own, poring through newspaper accounts of similar assaults.

At first Nora helped Rachel search, but finally stopped, telling her sister that it was time to quit, time to move on. Nora believes that Rachel did stop, but Moretti tells her that just a few weeks before she was murdered, Rachel had visited a man in prison she believes was her assailant in the old assault. But man is still in prison so he couldn’t be Rachel’s murderer.

Nora becomes as obsessed with finding Rachel’s murderer as her sister was in searching for her assailant. Her suspicion falls on first one man, then another. The first she suspects is Keith, the plumber who lives across the street from Rachel, and admits he was in her house the morning of the murder. He claims he was there about a plumbing problem, but Nora doesn’t believe him. She knows he is hiding something.

She obsesses on Keith to the point that she is stalking him, and when the police take him in to “help with their inquiries,” she is certain he is the murderer. A police search of Keith’s house and van turns up no forensic evidence, so Keith is cleared—but not in Nora’s mind.

Then there is Rachel’s former boyfriend, the one she almost married, but according to the police he has an impeccable alibi.

Another person who Nora suspects knows more than she is telling is a waitress at a gas station restaurant named Louise. Rachel was her boyfriend’s nurse after a car crash that left him critical condition.

“He beat her,” Rachel told Nora. Did Rachel intentionally murder the boyfriend because she felt so strongly about assault? Did Louise know about it and murder Rachel in revenge? Abused women often defended their abuser—but to the point of murder?

Louise is cleared of any suspicion, and Nora sinks deeper into her obsessive hunt for her sister’s murder. The irony is that Nora, who believes she knows her sister better than anyone, does not know her nearly as well as she thinks. Secrets between the two sisters, both those they share, but particularly those that they don’t, lead the police to suspect Nora of the murder. Suddenly Nora’s hunt takes on new urgency. If she can’t discover the killer, she may be spending years in prison.

Under the Harrow is eloquent without using overly descriptive narrative, and its psychological insight into Nora’s relationship with her sister is mesmerizing. This first novel by Flynn Berry is remarkable for its lack of the usual missteps of a rookie writer, such as over-writing and dependence on coincidence. The novel’s structure is tight, and the characters are believable with understandable motivations for their actions.

Fans of psychological suspense will be impatiently awaiting Berry’s next book.