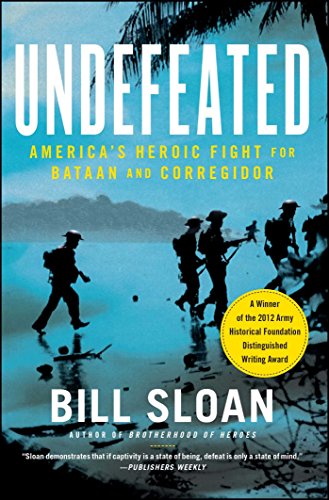 “. . . does an excellent job of telling the story of one of America’s finest and darkest episodes in World War II . . .”

The early days of American’s involvement in World War II were marked by a chain of serious military defeats. Beginning with the attack on Pearl Harbor, the Japanese Empire drove relentlessly across the Pacific Ocean to conquer a vast swath of territory until their advance was checked at the Battle of Midway in June 1942.

As a result, most of these battles, particularly the six-month battle for the Philippines are not as chronicled as the more victorious battles of Midway and Guadalcanal that occurred later in 1942.

Bill Sloan tries to correct this record with Undefeated: America's Heroic Fight for Bataan and Corregidor, which tells the tale of America’s Thermopylae—a valiant last stand by a group of brave men and women trying to buy time for America to recover from the Japanese onslaught and begin striking back.

Undefeated: America's Heroic Fight for Bataan and Corregidor is unexpected in several ways. It is not a narrative or battle history, but a collection of oral histories that Mr. Sloan attempts to stitch together into an account of what happened to the men and women who tried to fight off the Japanese war machine against impossible odds.

This approach has its drawbacks, namely jumping around from participant to participant that leaves some holes in the overall narrative that Mr. Sloan tries to fill with a news-reel update of the overall progress of the Pacific war. The book also could have used one or two more maps showing the American retreat to the Bataan Peninsula and the final collapse of the American lines during the final Japanese offensive of April 1942.

But Mr. Sloan does a commendable job of telling the stories of a large collection of both American and Filipino participants, especially their brutal treatment as prisoners of war, including being shipped to Japan to serve as slave labor.

The courage and sacrifice of thousands of Americans and their Filipino allies comes through in the book, especially Mr. Sloan’s excellent description of the world’s last cavalry charge by the U.S. 26th Cavalry Regiment and its intrepid leader, Lieutenant Ed Ramsey.

Once settled into the book, it is gripping account that clears up a lot of misconceptions about the loss of the Philippines and takes a critical look at the actions of America’s political and military leaders in the earliest days of America’s involvement in World War II.

General Douglas MacArthur comes in for particular criticism from Mr. Sloan, both for the unpreparedness of American and Filipino forces to execute their planned strategy of falling back on Bataan and Corregidor to form a bastion and await reinforcements, including leaving months worth of food and supplies to fall into Japanese hands because they were not evacuated out of Manila before its capture by the Japanese invaders as an open city.

The lack of a response by American airpower in the Philippines for hours after the attack on Pearl Harbor is still a largely misunderstood action in the early part of the war, and Mr. Sloan can provide no good explanation for MacArthur’s decision making process, other than describing the extreme frustration of his subordinates and the indecision that gripped the Allied command for almost a full day after Pearl Harbor.

Nearly all American aircraft took off soon after word of the attack, awaiting orders to strike back at Japanese forces on the island of Formosa, the most likely springboard for an invasion. Whether awaiting a formal declaration of war or forlornly hoping that the Philippines could stay neutral before the Japanese juggernaut, MacArthur makes no decision to attack. When the planes are forced to land and refuel, a wave of Japanese air power destroys most of them on the ground, dooming the Americans and their Filipino allies.

In truth, as Mr. Sloan outlines, there was little chance for American relief of the meager forces holding off the Japanese who maintained total air and maritime supremacy after the disaster of Pearl Harbor, and the troops in the Philippines resigned themselves to holding out as long as possible while hoping against hope that relief, reinforcement, or resupply would come. None did. And when nearly 15,000 American troops fell in Japanese hands, the largest surrender of American troops in World War II, their struggle for survival was only beginning.

The bravery and sacrifice of the Filipino people is also vividly described by Mr. Sloan, from their offering food to the prisoners on the Bataan Death March, to their forming guerilla armies to strike back against the Japanese occupiers.

Some of the finest tales are the shared struggle of soldiers who escaped capture to fight on with their Filipino allies, many of them facing horrific deaths while awaiting the fulfillment of General MacArthur promise of “I shall return!” made shortly after his escape from the Philippines ordered by President Roosevelt.

Although it takes some settling into, Undefeated does an excellent job of telling the story of one of America’s finest and darkest episodes in World War II.

Mr. Sloan should be commended for capturing the oral histories of these brave warriors who made a glorious and costly sacrifice in the early days of America’s Pacific war.