Uncontrolled Risk: Lessons of Lehman Brothers and How Systemic Risk Can Still Bring Down the World Financial System 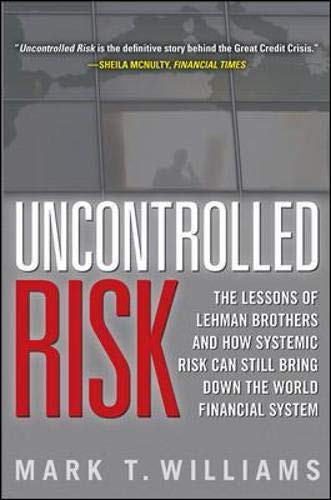 Of Washington, it has often been noted that it doesn’t much matter what you say so long as you say it at the right time. One thinks of the main character in Joseph Heller’s novel Good as Gold, who remarks that in Washington, all his sarcasms are received as truths. “We all missed that,” replies the White House official. Risk manager Mark T. Williams has not written sarcasms, but rather truisms that are carrying weight in Washington. The book, Uncontrolled Risk: The Lessons of Lehman Brothers and How Systemic Risk Can Still Bring Down the Financial System, is making hay on the Beltway. We’ve had “Lehman for Dummies,” “Lehman Light,” and at least one really respectable and interesting discussion of the downfall of Lehman and the lesson in systemic risk that it taught us. (Watch NY Journal of Books for the review of How Markets Fail.)

With Williams, we have Lehman for policy wonks. It is a thorough and competent assessment of what happened to Lehman before and after the financial crisis. It draws the conventional conclusions from the assessment. The style is almost completely drained of color, and it moves at a breathless pace that makes it surprisingly readable, rather like a Cliff’s Notes or one of those outlines of the classics. Here’s a sample: “Lehman was preparing to be spun off from American Express, it had basically managed risk by placing bets and then having any financial losses absorbed by its deep-pocketed parent. Risk management and reporting systems were not viewed on a firm-wide basis, nor were they considered as important as they should have been.” Next slide, please.

No surprises here, because Williams is a veteran risk manager, and the risk management industry has had trouble coming up with a response to the crisis. Bet you didn’t know that, as early as 2000, laureate economist Myron Scholes, co-author of the classic Black-Scholes equation, warned that risk modeling was becoming challenged, the so-called “Value-at-Risk” model didn’t work, and that we’d better watch out if there is another event big enough to drive investors back to liquidity (American Economics Association Papers, May, 2000). Risk managers paid no heed.

Since the crisis, risk managers have been crying “miserable sinners,” and asking to reestablish the faith on a new level. Here’s a sample from a post-crisis risk management manual: “Moving forward, these deals need to be modeled in a professional and transparent way which is subject to the wisdom of the crowd so that all can benefit. Models need to be publicly vetted. Risk management needs to be elevated beyond the profit center and the institution so that counterparty and systemic risk can truly be understood and managed.” Yeah, peace on earth, etc.

Williams does try to come to terms with where Lehman’s risk management went wrong. After a short history of the bank, and a quick rundown of how investment banking developed in the U.S., Williams looks at how the risks built up from Lehman’s involvement in real estate, and how the various techniques and models the bank used couldn’t manage it.

There is a reasonably in-depth discussion of the crisis that occurred when the mammoth hedge fund Long-Term Capital Management went bust in 1998, and how the fears for systemic risk that that crisis invoked were rapidly put aside. Williams correctly raises the question of “moral hazard,” that shibboleth of risk managers: If you save a bank when it fails, then all the other banks will know that they will be saved too, and so they all take risks without fear of failure (regulators have learned from this to the point that they are trying to make banks pay a tax to cover the costs of failure—we do make progress from time to time).

Williams gives a blow-by-blow account of the fall of Lehman and the rescue of AIG, pointing, as well he should, to the incredible decision by then Treasury Secretary Hank Paulson to allow the bank to fail—possibly the worst decision in history since Napoleon decided to make a stand at Waterloo.

Williams then makes a series of recommendations that are very similar to those that have been under consideration by Congress for some time. He rightly points out that the Federal Reserve is not capable of regulating systemic risk (“It’s like a father giving his son a bigger and faster car after he’s just crashed the family station wagen,”) but it is not clear how a systemic regulator is to manage risk on a global basis. The Bank for International Settlements is supposed to do that (where were they when the lights went out? Good question)? The BIS has created Basel III and tweaked it since the financial crisis to try to make banks safer. It’s unfortunate that Williams doesn’t address the global issues, but he brings out the appropriate issues for the U.S.

It’s a book that students of economics will no doubt read in Financial Crisis 101 for many years. It’s a good place to start, but no doubt they will want to go farther. “For as surely as the body dies for lack of food, or grows unhealthy by improper feeding, so does the mind of man languish if mental nourishment be withheld,” (Harmsworth Self-Educator, 1901).