An Uncommon Reader: A Life of Edward Garnett, Mentor and Editor of Literary Genius 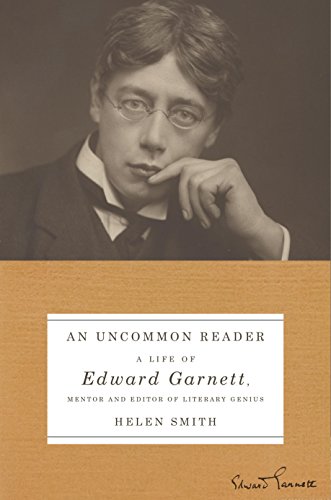 Contemporary readers probably won’t recognize the name Edward Garnett, not unless they’re students and scholars of modern British literature. As a literary critic and a reader for many of the major London publishing houses, Garnett helped to bring the work of Joseph Conrad, D. H. Lawrence, and Dorothy Richardson to the attention of the public.

Now there’s a new biography of him by Helen Smith, a British academic who earned a Ph.D. from the University of East Anglia in England. An Uncommon Reader: A Life of Edward Garnett, Mentor and Editor of Literary Genius is her first book and shows some of the strengths and weakness of first books.

Smith might be called an acolyte of the man who operated largely behind the scenes and who kept the publishing industry up and running near the height of the British Empire. She seems to know almost everything there is to know about Garnett. Her book runs to nearly 450 pages and includes footnotes, a bibliography, and an index.

I first encountered the name Edward Garnett when I was a graduate student writing a dissertation about Conrad, the Polish-born novelist who became a British subject and transformed the tradition of English literature in books like Heart of Darkness, Lord Jim and Nostromo. Garnett helped him along the way and eased the transition that he made from sailor to author, and from Polish exile to patriotic Englishman.

Graduate students will relish every detail and every fact in Smith’s biography, taking them back to England at the end of the 19th and the beginning of the 20th century, when English authors seemed to be the envy of the world and London was the literary capital.

By writing about a minor rather than a major cultural figure, Smith provides a new angle on English national identity and the culture of the book just as writers like Conrad, Ezra Pound, T. S. Eliot, and Virginia Woolf were breaking away from the Victorian Age and helping to give birth to modernism.

Born in 1868, Garnett died in 1936. So he straddled centuries and looked back to the past and ahead to the future. Proper, precise, and fastidious, he appreciated innovation in fiction and at the same time understood the fickleness of the literary marketplace and the need to keep up with the latest waves, fads and literary breakthroughs.

He might have found a place for himself in today’s publishing world in which the same pressures exist on readers, critics, and reviewers.

Edward’s wife, Constance Garnett, who was six years his senior and who translated Tolstoy, Dostoevsky, Gogol, and Chekhov into English introduced at least two generations to Russian literature before her translations were superseded by contemporary translators more attuned to Russian culture and the Russian language.

Smith follows the arc of Constance’s career, which eclipsed Edward’s. She allows follows the career of their son, David, who wrote a fabulous novel titled, A Man in the Zoo, as well as David’s grandfather, Richard, who was the superintendent of the British Museum Reading Room for nine years.

The Garnetts couldn’t escape from books and libraries, reviews, and manuscripts.

Smith ends her balanced biography with a quotation from a letter that T. E. Lawrence wrote to Edward Garnett. A British archeologist and the author of the classic, Seven Pillars of Wisdom who gained fame as “Lawrence of Arabia,” he put Garnett in his place when he predicted that he would be remembered, not for his own writing, but for “the writing of which you have been the cause in others.”

In a way Garnett was the midwife and the muse of modernism, or at least one strand of it, though he often sounds so Victorian and so Edwardian as when he calls himself a “mountebank.” Part of the pleasure of reading Smith’s An Uncommon Reader is that it turns contemporary readers into uncommon readers, not unlike Edward and Constance Garnett.