Uncharted: Big Data as a Lens on Human Culture 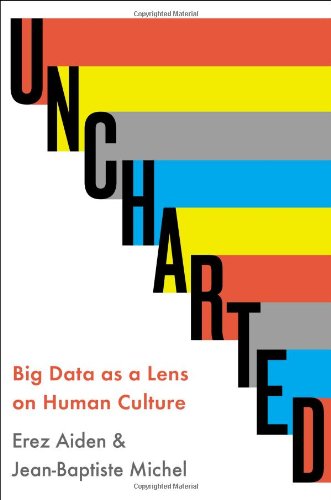 In the 21st century we face a digital world where almost every aspect of our lives is recorded. The authors of Uncharted: Big Data as a Lens on Human Culture discuss the power and problems inherent in attempts to measure aspects of human experience on an enormous scale.

While Uncharted is entertaining in itself, it provokes serious thought about data. Who does it belong to? Where will our data be used? Have we gone too far?

The lens through which we see things and see data began with the invention of eyeglasses in the late 13th century. Then microscopes and telescopes further altered our ways of seeing. As science progressed, sophisticated devices evolved that track, store, measure, and compare volumes of data.

Uncharted looks at how human culture has undergone subtle changes over time. As the authors suggest, the Big Data Revolution, which allows us to see things in new ways, can extend to the humanities, social science, and commerce.

Today’s companies that create tools to build digital storehouses are recording human culture as their core business—and as we know, we leave a trail of digital breadcrumbs everywhere in our lives.

Aiden, who directs the Center for Genome Architecture at Rice University, and Michel, founder of a Quantified Labs, a data science company, have experimented with datasets using the scientific tool: Google Books Ngram Viewer. The datasets available include more than 30 million books digitized by Google—all available to those interested in digging through masses of data. The authors created a shadow dataset (an Ngram) for every word and phrase.

Using this Ngram data from millions of books, the authors offer a view of various historical changes quantified—from everything including the literary output of Edgar Allen Poe to the process of forgetting—by graphing short- and long-term memory.

Uncharted is based not on the full picture of the “big data” craze we read about lately, but the ability of Ngrams to display diagrams that tell stories, visual graphs of moments in history.

The results of illustrating volumes of reference material offer an interesting look back, but with all this data available, it is perhaps more important to look ahead.

What will happen with all the data being captured now in the electronic age? While there is a growing concern about the digital shadows we create, a future of “life logging” is now with us for better or worse.