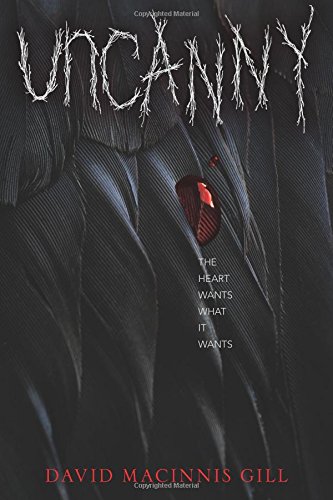 “This morning I awoke to a dead girl standing beside my bed, peeling strips of skin from her arms.”

In the world of openings sentences, this is certainly one that will capture the attention of readers, particularly those who are fans of the horror genre. Uncanny begins with the promise of horrific things to come, and it delivers on that promise. Willow Jane’s waking dream portends much to come. When two drunk teens awaken an ancient witch bent on revenge, Willow Jane and her close-knit family become the target of evil.

Help is offered in the form of Harken, a slave to Shadowless, the witch. But can Willow Jane trust this creature? His offer seems genuine; however, he does have an ulterior motive: earning his release from Shadowless’ servitude. If he can steal the item Shadowless seeks, he will finally be free. Perhaps it is better to try to defeat the witch on her own. The treasure Shadowless seeks is a black egg. Unfortunately, the egg is in the possession of the owner of a pawnshop, and he is not about to part with it.

This wrinkle adds another delicious layer to the plot as those impede access to the egg will suffer awful fates. Readers will delight in the wheels of retribution while simultaneously worrying where the violent revenge might end.

It seems as though all roads to safety are blocked. But when Willow Jane’s sister is kidnapped by the witch, she is determined to rescue her no matter the cost. Making a deal with the devil may be Willow Jane’s only option.  Gill keeps readers wondering worriedly from page to page. Not everything nor everyone can or should be trusted.

Nonstop action also awaits with every turn of the page making this a quick read despite its length (544 pp.). The length, though, may prove daunting to some readers unwilling to tackle this book. A short read aloud of the first two paragraphs followed by a good book talk, will send readers dashing for a copy.

Fans of Daniel Kraus’ Rotters and Scowler will dive into Uncanny and demand more. Also recommend this to readers who loved Coldest Girl in Cold Town by Holly Black and Rot and Ruin by Jonathan Mayberry. All remind readers that evil may be lurking anywhere.

As Shadowless whispers, “Hell is empty, and the devils are here.” There are demons aplenty in this thriller.

Teri Lesesne's most recent book is Reading Ladders: Leading Students from Where They Are to Where We'd Like Them to Be. She is respected by teachers across the country both for the passion she brings to connecting tweens and teens—in part through her in-person teacher workshops and her social networking posts that track the the best and most helpful literature for teaching adolescents—and her professional books. She is a Distinguished professor at Sam Houston University in the Library Science Department, received a 2007 ALAN Award, and was a judge for the 2015 National Book Award for Young People's Literature.