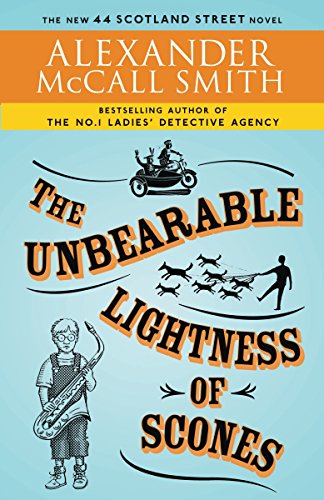 One could scarcely choose a better book to ward off a dreary winter's day than this latest installment to the 44 Scotland Street series. Originally, the series was published as a weekly newspaper serial in Edinburgh’s The Scotsman, but it has evolved into a full blown book series, of which this is the fifth work. Although for maximum appreciation of the series’ characters it is best to start with the first title (44 Scotland Street), an astute reader could pick up this title and enjoy it at face value. The books are made up of chapters/vignettes involving episodes in each of the five main characters lives, as well as those of several minor characters. McCall Smith performs his inimitable magic with each as he weaves their daily lives with humor and philosophic musings. Although there is no central plot, the lives of each character, at least briefly, intertwine with the others.

Seemingly mundane moments in life (a doctor's appointment, a visit to the local pub, a honeymoon, to name a few) are brought under scrutiny where readers may find a wealth of wisdom within human frailties, and delight at triumphs, as well. The characters themselves (a seven-year old boy and his mother (Bertie and Irene), a retired anthropologist (Domenica), an aging artist (Angus), a brash young man who's full of himself (Bruce), and even a dog (Cyril), are among the delightfully-drawn figures with whom we come into contact. Each simple act, from a meeting of young cub scouts to contretemps between neighbors, to a young man getting dumped by his fiancé, has moments of insight that descend upon the characters and readers alike. For the reader, there are laugh out loud moments, as well as moments of regret and disdain for actions and situations.

What further provides amusement and enjoyment to this series, and particularly this title, is the background that envelopes the books. Edinburgh is laid out like a palette for readers who are likely to begin planning a trip to Scotland! Not only does McCall Smith name landmarks and streets that provide a realistic setting, he also incorporates real people (e.g., the author Ian Rankin) to his characters’ encounters. He also uses playful allusions throughout (as a tribute, perhaps?) to other authors’ work, as evidenced first in the very title of the book (an obvious take-off on The Unbearable Lightness of Being, by Milan Kundera). These techniques in presentation serve to provide all the charm a reader could want in this entertaining book/series that is thought provoking without being ponderous.