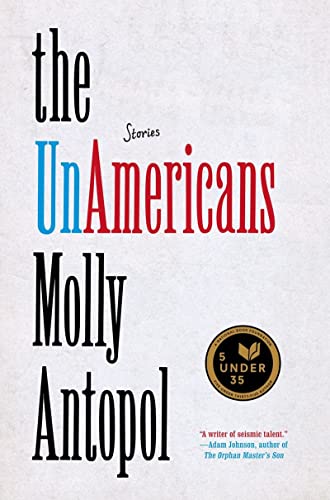 “Molly Antopol is an astute, insightful observer of human relationships . . . a remarkable collection of short stories. . . . In a word: Wow!”

The UnAmericans, Molly Antopol’s debut story collection, is powerful, well written, thought provoking, and very impressive. Because of the depth of character development in the stories, many of Antopol’s tales possess the richness of a novel, but are also still effective, beautifully constructed short stories that cohere well as a collection.

The stories in The UnAmericans take place mostly in America and Israel with some reminiscences and digressions to Eastern Europe. The stories revolve around different types of Jewish families and explore family dynamics, relationships, and legacies.

For example, “Minor Heroics” which takes place in Israel, examines sibling rivalry in light of one brother’s injury. The tale “My Grandmother Tells Me This Story” is a first person narrative by a grandmother to her granddaughter, a writer, in which she relates the story of her survival hiding in the woods during World War II.

The final story in the collection, “Retrospective,” takes place in both Israel and America and is about the death of a dynamic, art-collecting grandmother and her impact and legacy on her family. A number of stories including “The Old World,” “The Quietest Man,” and “Duck and Cover” look at complicated relationships between fathers and daughters.

Molly Antopol is an astute, insightful observer of human relationships, which is evidenced in her psychologically complex, well-developed characters and narrators. She is particularly adept at illustrating grief and loss.

In the story “A Difficult Phase” a young woman, Talia, is dating Tomer, a middle-aged widower and father of a teen-aged daughter.  He explains to Talia: “’I used to be the kind of person who could eat a really good sandwich and that would be enough,’ Tomer said. ‘And now I walk around and see people laughing, at the movies or wherever, and it’s like I’m a separate species.’”

The stories “Duck and Cover” and “The Unknown Soldier” paint particularly vibrant, credible portraits of children. Both stories take place in California in the 1950s and examine, in part, how a father’s involvement or implication in the Communist party affects his family and his children’s desires for their father’s love. In “Duck and Cover” Judy, the teenage narrator wants to attract her distracted father by shirking her responsibilities at work, picking up a boy, and parading him in front of her father in the hope of gaining his attention.

Benny, the main character Alexi’s child in “The Unknown Soldier” wants to protect his father. After being released from prison for alleged Communist sympathies, Alexi a now moneyless, unemployed actor, spends his first days of freedom trying but failing to make amends to his son Benny. Alexi is no longer able to afford nice hotels or luxuries. Antopol stunningly concludes “The Unknown Soldier” with:

“There Benny was, swiping a bottle of the Private Reserve right off the shelf.  There he was, slipping it under his shirt, walking past the bar without even a sideways look—a better actor, Alexi thought, than he himself. His pulse kicked. He has no idea what to do. He stepped forward to stop him, to turn him around and make him give it back, to teach his son a lesson while he was still young enough to listen. But Benny was already walking through the doors and into the bright sunny day, pulling the bottle from his shirt and thrusting it at his father: terrified, astonished, ready for his love.”

Antopol’s prose is clear, thoroughly engaging, and colorful. The diverse settings and details of her stories are memorable. She also masterfully creates various characters, narrative voices, and dialogue.

Howard Siegel, the sarcastic, funny narrator of “The Old World” describes his newly religious son-in-law whom he calls “the fool:” “Ya’akov was small and wiry, with agitated little hands and a kippah that slid around his slick brown hair, like even it didn’t know what it was doing on his head. He was from Long Island. He had once been Jake ‘The Snake,’ pledgemaster of his fraternity. At the wedding his brothers from Sigma Phi had looked as flummoxed as his parents, as if everyone were waiting for Jake to confess that his religious awakening was just an elaborate prank.”

The UnAmericans is a remarkable collection of short stories. Each story stands on it own but also ties in thematically with the rest of the tales in the collection. There isn’t a single mediocre or even lesser story in the bunch. The tales of The UnAmericans are unsettling at times and moving. Each story concludes with a wow-inducing finish, as does the entire collection.