Un-American: A Soldier's Reckoning of Our Longest War 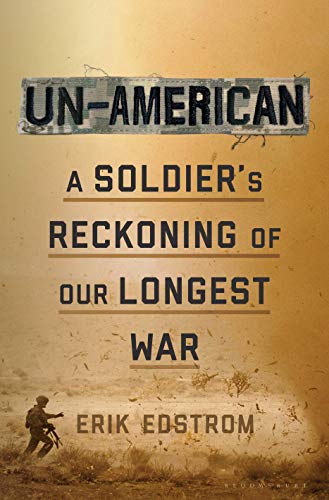 “Un-American is most extraordinary because even after the indoctrination of West Point, Edstrom dared to question some of the decisions and the presence of US military as invaders not saviors.”

“Never Forget the far larger costs of America’s permanent war posture and realize that humanity’s greatest problems will not be solved by the military. The future of humanity depends on our ability to grow our capacity for cooperation, not conflict.”

Edstrom represents the best of America in his journey from West Point cadet to Bronze Star Afghanistan veteran through his pursuit of truth and justice about the real costs of war, but the flack he will take for daring to speak out against the war machine will make his combat award seem like a fraternity pin. His searing memoire will keep you riveted to the last pages, not just for the Hollywood-worthy story, but because of his exceptional writing.

Edstrom, like so many soldiers, chose the military as a way to gain a college education without crushing debt. The hard truth of the all voluntary military is an economic one; had he been able to afford a university education he would not have chosen enlistment, even via the citadel of West Point. He affords the reader an intimate portrayal of his indoctrination at the academy. By his second year at the institution he awakened to the harsh realities of military life outside the base and Edstrom exhibits some of his best writing here. “Take your pick: Fort Bragg, Benning, Drum, Hood, and others: they are all sprawling, post-apocalyptic, one-star towns where dreams have died long ago and fast-food restaurants, payday loan shops, tattoo parlors, budget strip clubs, and boarded-up watering holes are the carrions vultures that feed the entrails of hope.”

Edstrom excelled at West Point and in his deployment to the neverending war, Afghanistan, but his moral compass was never completely eradicated, much to the chagrin of his unit commander. His empathy for civilian victims is discouraged in soldiers, whom must only feel dutiful and victorious in the cinematic war on terror. The US does provide compensation for civilian victims, but like any insurance company, the ability to actually receive compensation is arduous and many Afghan claims are denied. Throughout Un-American: A Soldier’s Reckoning of Our Longest War he compares the cost of his futile deployment activities, clearing the same road over and over again, in a country that doesn’t want us there, to an alternative outcome, like being able to pay for every soldier to attend a four-year private university. He crosswalks the expense of the military hardware to other ways to spend taxpayer dollars. A $10 IED can take-out an armored vehicle worth $1 million.

Fact-toid loving nerds will dig the details not only for the math, but the observations on poor or nonexistent planning accompanying regular activities of deployment in a combat zone. It leaves one wondering why greater thought isn’t given to actions that cost human lives and countless suffering. The quote from the NATO general acknowledges the high civilian casualties without proof of threat, so poignantly illustrated in the incompetent machine gunning of a passenger bus by a minimally trained Arkansas National Guardsman. Literally it appears, an officer can order a soldier to his death with no consequence, as revealed in the death of Tyler Parton in Konar. And that many terrible things in war are never reported, especially war crimes, because it will create bad PR for the military, possibly impacting government funding for some WMD, is crystal clear.

“When I became capable of killing, I killed a part of my former self. I was absolutely and irreversibly changed.”

“Violent conflict and military excursions have become normalized. It is the default position. They hardly register in our collective consciousness. To most Americans war is elevator music. Political violence, it seems, is as American as Instagram, baseball, and mass shootings.” “Veteran-owned clothing companies celebrate war, violence, and xenophobia, making walking caricatures of junior enlisted soldiers who buy the stuff, and pay tribute to one of America’s most defining features: a famine of cultural self-awareness.”

Un-American can be a grinding read about the gore of war, but Edstrom’s talent as a writer provides humorous observations just when you can’t stand it anymore. Denial of sex is of course a main topic among men in their sexual peak, and the book is replete with jokes in this regard (helicoptering penis in the tank comes to mind).

Americans are brainwashed to never confront a soldier and always thank him for his service (using the masculine pronoun in a gender-neutral way), understanding that of course, no matter what a civilian is doing it couldn’t compare. Edstrom reveals terrific black humor assailing the idea that any activity in the military is greater than someone working in the private sector, including motor-pool-pushing-paperwork-generators. Having had conversations with others about the contribution of teachers and healthcare workers versus soldiers, it is refreshing to have a war veteran make the case himself. Edstrom’s derision for the false marketing of patriotism is always on point and humorous at times.

Un-American is most extraordinary because even after the indoctrination of West Point, Edstrom dared to question some of the decisions and the presence of US military as invaders not saviors. For a real look at the marketing of and true cost of war, this is a must-read, and one to buy for all of the service-age people in any family. We may not all be soldiers, but we vote.