Ukraine and Russia: From Civilized Divorce to Uncivil War 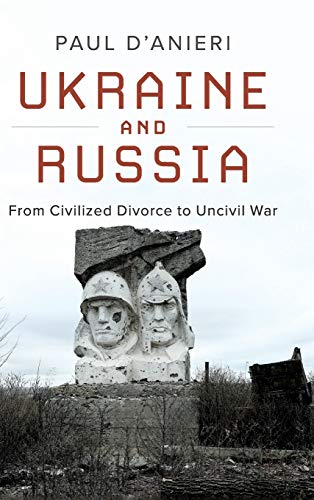 “well laid out for the average reader wanting to understand how this new frozen conflict occurred . . .”

The Russian seizure of Crimea in 2014 and the ongoing conflict between the Ukrainian government and Russian backed separatists in the eastern region of the country took most of Europe and the United States by surprise. The swift action by the Russian military using “little green men” provided confusion and deniability as Vladimir Putin instituted a new era of “gray zone” warfare—melding diplomacy, information operations, economic coercion, and military power into both a rapid victory for Russia and a tense standoff that continues over five years later.

As this volume lays out, those developments, which happened over the course of a just a few weeks for the Russian annexation of Crimea, had their genesis in the end of the Cold War nearly two decades earlier. The author begins from the breakup of the Soviet Union and the initial independence of Ukraine to consider that while open conflict may not have been inevitable, the collision of visions for Ukraine’s association with Russia and the rest of Europe aggravated the two country’s tense historical relationship.

The author steps through the next 20 years of Russo-Ukrainian foreign relations, interlacing the effect of international and domestic politics, economics, and most importantly, what he calls the “security dilemma” of relations between the two countries. This idea, the central theme to the narrative, postulates that each country had a particular and unchanging set of strategic goals assumed to be necessary for their own security and sovereignty that were fundamentally divergent to the other.

The prime example of this phenomenon was the desire of Russia to maintain its great power status, particularly the hegemony of a sphere of influence over the former Soviet republics of Ukraine and Belarus. This was a direct challenge to Ukraine’s desire to open up to the West and explore eventual admission to NATO and the European Union.

The role of NATO and the Balkan Wars of the 1990s receives special attention from the author as these events had an outsized influence on the overall strategic situation between Russia and Ukraine. The two wars NATO conducted against Serbia, both of which the Russians opposed but were either militarily or politically unable to stop, convinced Russia that NATO was a growing threat on their eastern frontier, which combined with NATO’s rapid expansion eastward into the former Warsaw Pact countries after 1991 made Russia consider any move by Ukraine to seek admittance into the military alliance a strategic threat.

Although the author also explains that decisions taken by individuals, particularly Vladimir Putin, also had an influence on events, the long-term environment was ideally suited for a potential clash of arms. The amount of detail the author provides is substantial and excellently annotated footnotes are provided. Some interesting details also provided by the author include the fact that Ukraine was a nuclear power in 1991, with large numbers of Soviet ICBMs retained by the Ukrainians after they declared independence. The US exerted great pressure on them to turn over their nukes for disposal, guaranteeing their sovereignty in return. Although the author does not spend a great deal of time speculating, it does make the reader wonder if events might have turned out better or worse if Ukraine had retained some nuclear capability.

In addition, although a political crisis prevented a Ukrainian response to Russia’s seizing of Crimea, the Ukrainian Army was on the verge of victory before the Russians not so covertly sent regular army forces into the eastern provinces of Donetsk and Luhansk to bolster their separatist allies and establish the current line of conflict still in force today.

Although this book is rich in detail, it is very well laid out for the average reader wanting to understand how this new frozen conflict occurred. The author pulls no punches and lays out various arguments in a straightforward manner. Although there have been recent signs of a slight thawing of the immediate conflict, the overall strategic situation remains unchanged and this conflict will remain a challenge for Europe to manage for the foreseeable future.