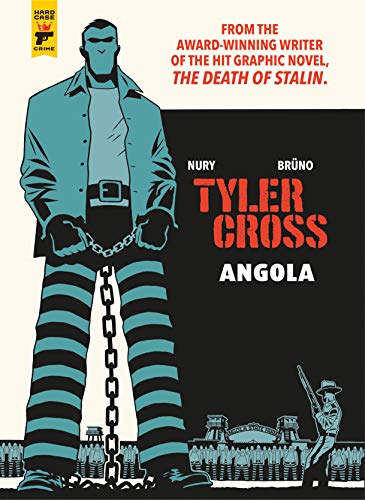 “Tyler Cross: Angola is the perfect graphic novel for those sick of superheroes. . . . for those willing to eat a little darkness, this graphic novel delivers with the type of intensity not seen in American fiction since the heyday of Jim Thompson, Charles Williams, Charles Willeford, and the rest of the Gold Medal hooligans.”

Tyler Cross is the epitome of a hard case. This unrepentant thief has traveled the globe on jobs as dangerous as they are lucrative. In this gig, Cross finds himself imprisoned in the infamous Angola Prison Farm of Southern Louisiana. A mob-run labor camp full of the South’s most hardened criminals, Angola becomes Tyler’s laboratory—his classroom where he plots his revenge against the people who betrayed him for $400,000.

The job begins when Tyler is hired by a New Orleans jeweler named Hermann Van Geld. Van Geld’s criminal crew include Tyler, a car-loving brunette named Iris Bowman, and a safecracker named Neville. The original plan was to pull off an insurance scam so that Van Geld’s wife would get nothing in their upcoming divorce.

Everything went haywire (in good noir fashion), Neville winds up dead, and Cross gets arrested and sent to Angola. Iris and Van Geld, the backstabbers, go their separate ways. Iris travels to Mexico and enjoys margaritas by the hotel pool, while Van Geld enjoys police protection in the Big Easy. Cross will eventually drink the blood of both.

Tyler Cross: Angola is a classic crime caper told in the hardboiled style. Added to this mixture is sun-drenched Southern Gothic replete with stock characters like the cheating wife, luckless cons, both white and black, and the tyrannical captain of the prison guards. Yet another ingredient is also present thanks to characters like Don Carlo Persico and his Sicilian gangsters.

In the midst of all of this chaos, Cross stands alone as the laconic terror of Angola. Cross is Richard Stark’s Parker, except far more violent. Tyler Cross: Angola also has shades of Cool Hand Luke and that film’s emphasis on the futility of the underground life. However, writer Fabien Nury, artist Bruno, and colorist Laurence Croix all should be commended for creating such a starkly bleak story with such gorgeous scenery. Thanks to Bruno’s pencils and Croix’s hues, the characters in this graphic novel look like the degenerate offspring of the Sunday comics. The unrealistic images only serve to heighten the depths of despair in this story.

Tyler Cross: Angola is the perfect graphic novel for those sick of superheroes. There are no altruists in this one, but for those willing to eat a little darkness, this graphic novel delivers with the type of intensity not seen in American fiction since the heyday of Jim Thompson, Charles Williams, Charles Willeford, and the rest of the Gold Medal hooligans.