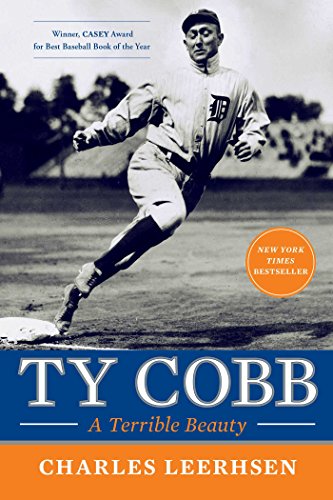 Baseball historians generally agree on the mainstays of the baseball morality tale. They know that Abner Doubleday had nothing to do with the invention of the game. (He was a cadet at West Point in 1839 when fabulists credited him with inventing the game in Cooperstown, New York.) They know that George Herman “Babe” Ruth, Jr. was not only a Yankee slugger nonpareil and a great pitcher when with the Red Sox, but he also was a wastrel without peer. No hot dog or young flapper within arms’ reach was safe when the Babe was around.

Ty Cobb, we all thought, while certainly a brilliant baseball player—perhaps the best whoever played the game—was also a racist thug who was despised both by his opponents and his own Tiger teammates. Alas, Charles Leerhsen has revised the Story of Cobb in a wonderful new biography that is certain to generate consternation among the baseball literati.

Leerhsen’s Cobb was a moderate on race relations (at least for his time) and a fine fellow to many within the game. (Of course, there were no persons of color in the Major Leagues at that time, but, according to Leerhsen, Cobb would have welcomed their participation.) The evil Cobb, whom we all thought sharpened his spikes to injure infielders who foolishly would stand in his way as he ran the bases with dispatch, was actually just your typically misunderstood, Southern-bred athlete who became one of the greatest players of the National Game during the first two decades of the 20th century.

Leerhsen displays his sports writing background as he scribes his revisionist history. That virtue makes his often-told story come alive. He is not an academically trained historian, but that does not detract from his work which is thorough and delightfully-written.

“[Cobb] wanted to play a slightly different game than everyone else was playing, to be out of sync with the anticipated rhythms, protocols, and conventions. Hit ‘em where they ain’t, run when you really shouldn’t, keep going when you ought to stop. It was the modern age and his game was the baseball equivalent of modern art. It was at once a dramatic break from the past and a comment on it. It made people nervous. His game looked ugly until it looked bold and smart.”

Much of the book, like sports writing in general, is anecdotal and pieced together to bolster the author’s revised characterization of his subject. The author relies primarily on newspaper accounts—a notoriously unreliable source—although he interviewed many who knew the Georgia Peach and thought well of him.

Leerhsen seems particularly intent on discrediting the Cobb biographers, particularly Al Stump, who had besmirched Cobb’s reputation. All previous authors seemed to have committed abundant errors. But Leerhsen himself seems intent on making all the pieces of the Cobb puzzle fit neatly into his reconstructed portrait.

The well-known events in Cobb’s life are all covered: Cobb joined in fisticuffs with teammates, rivals, cranks (baseball fans), hotel staff, the ballpark’s groundskeeper, umpires and complete strangers. For each misstep, however, Leerhsen offers an excuse, or at least an explanation, that denies that Cobb was a hothead bully bent on gaining the deference of those who would not recognize his preeminence.

He downplays the negatives—Cobb was just ultrasensitive, anxious. and feisty— and focuses on the positive events that support his revised vision of his hero. After all, Cobb was the first player elected to Baseball’s Hall of Fame, one of the Eleven Immortals. He liked children. He read books. He was loved by the fans of the game that he played at the highest level for over two decades. Cobb was a role model for youngsters, demonstrating how to succeed in American life. Perhaps Cobb’s best life lesson was to purchase Coca-Cola and General Motors stock at bargain prices.

It is comforting to learn that Cobb was not the vicious ogre others have made him out to be—comforting, but only if it is an accurate assessment of the master of the base paths. Writing history—whether of sports or politics—starts with facts, but then relies on inference to fill in the outlines. Every author, including Leerhson, selects his own pallet of colors.

Leerhson’s Ty Cobb will certainly encourage others to look again at our sports’ heroes. Maybe Babe Ruth was not a profligate man-child, but rather just a fine fellow well met. Perhaps Mickey Mantle did not have a problem with alcohol, and Don Drysdale did not aim at batters’ heads. Could Abner Doubleday have visited Cooperstown for a long weekend in 1839 in order to invent the National Game?