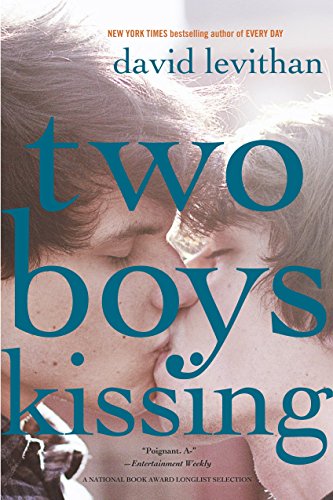 “This story is as much about history as it is about progressing a just cause.”

David Levithan, since the release of Boy Meets Boy in 2003, has woven tales of friendship, romance, and acceptance for the young adults of the LGBTQ community. His stories convey the degrees of tolerance within societal and family units today as more and more youth are coming out at earlier ages and the problems that these youth confront in their effort to be recognized and accepted.

Mr. Levithan does a masterful job of bringing to light these tales at an age where all teenagers are just starting to discover who they are. In Two Boys Kissing he has presents the reader with myriad tales of love, acceptance, and identity intertwined by an act of awareness meant to bring to the spotlight these struggles that the youngest members of their community still face today.

Harry and Craig will engage in a kiss but not just any kiss—one that will be streamed live to a global audience in an effort to break the record of 32 hours, 10 minutes, and 10 seconds for the longest kiss.

In his latest release, the author has also given a voice to the generation that has preceded the one of today and their struggle with, and eventual death from, AIDS.

Portrayed as a spiritual amalgam of hopes and desires extinguished, they have seen the same struggles in their youth as those of today, but they also see progress. They see both the likes of Avery and Peter, whose families are openly accepting of who they are, but they also see their struggle in many, like Tariq, Ryan, Neil, Cooper, and Craig, who feel they must still live in the shadows as they seek acceptance for who they are.

Tolerance is the slow but effective remedy that exposes and cures ignorance, sometimes taking generations of time. The author does a great service to the LGBTQ youth of today by letting them know how their struggle has evolved from the generation persecuted before them. This story is as much about history as it is about progressing a just cause. And because of that, this is a book that could be read by any young adult today.

To quote that spiritual force: "Ignorance is not bliss. Bliss is knowing the full meaning of what you have been given." Through that single, seemingly interminable kiss, Neil is able to confront his family and make them openly accept him.