A Twist of Hate 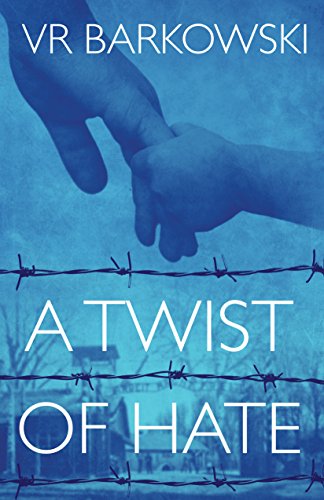 A priceless Cezanne, the centerpiece of a special exhibition at a prestigious San Francisco art museum, is discovered to be a forgery. The painting’s owner and the museum director ask the owner’s son, a former policeman, to investigate the crime secretly. But soon the seemingly staid director is found dead in kinky circumstances. So the ex-cop teams up with his best buddy, a lawyer, to figure out what happened.

Thus A Twist of Hate, the debut novel by the award-winning mystery short story writer VR Barkowski, is a combination bromance and detective yarn. (A brotective?)

Except that there’s one more twist: The motivations behind the painting switcheroo, the director’s death, and a subsequent murder go back decades, to the Holocaust and the intertwined stories of two French-Jewish families.

If modern readers thought the Holocaust had been portrayed in fiction via every possible style—straight narrative, retrospective, stream of consciousness, metaphor, black humor, even graphic novel (Maus) and bodice-ripper (The Woman Who Heard Color, reviewed in NYJB)—well, apparently writers are still seeking ways to come to grips with this unique historical horror.

One of the strengths of this new novel is that it focuses on some less discussed aspects of that era. Barkowski bravely centers the backstory on the conflicts between Jews who survived relatively intact and those who didn’t.

As Neil Sobol, a Jewish FBI agent, reminds Del Miller, the Jewish ex-cop, “The Shapiro family? They had the money and the clout to get out. My grandparents, your grandfather, they paid with their lives.”

The Shapiro family were Yoseph, a wealthy Jewish art gallery owner, and his son, Jakob, who escaped from France with their fortune before the Nazi invasion. Meanwhile, Del’s grandfather, Max, a courier for the gallery and a Resistance fighter, was stranded in Paris and then betrayed to the Nazis. However, he managed to smuggle his three-year-old son Samuel to his brother Avi in the United States, along with the Cezanne, which Yoseph Shapiro had once given to him in lieu of cash wages.

In the U.S., Jakob and Avi became friends. Thanks partly to help from Jakob, Samuel and his wife, Hanna, eventually amassed a noted art collection, anchored by the Cezanne.

When the novel begins, Samuel and Hanna have lent that Cezanne to the (fictitious) San Francisco museum where they are trustees. But Jakob’s son Daniel accuses the Millers of actually stealing the painting from his family.

Samuel and Hanna provide another unusual Holocaust angle in this book. They are cultured professionals (a physician and artist) living in one of America’s most secular blue-state bastions, yet they are also religious Jews who strictly observe the Sabbath—not exactly the typical Holocaust survivors of fiction. (Unfortunately, there are too many schticky references to Hanna’s homemade brisket and chicken soup.)

Beyond those virtues, A Twist of Hate is also a darn good page-turner.

The book’s biggest problem is its overload of clichés—in characterization as well as writing. Is every woman in San Francisco “achingly beautiful” and “ravishing, long-limbed with hair and eyes like burnished gold,” or only the ones who flirt with Del? (The two categories are almost synonymous anyway.)

“A cold sweat crawled down Max’s back” in the prologue, “Del’s blood ran to ice” in the penultimate chapter, and tired turns of phrase pretty much tingle every body part in all the chapters in-between.

Of course readers shouldn’t expect Shakespeare to write Perry Mason. Still, Barkowski clearly made an effort to rise above the whodunit genre by incorporating some of the unheralded complexities of the Holocaust. She could have climbed even higher with more deeply imagined characters, painted in sharper colors.