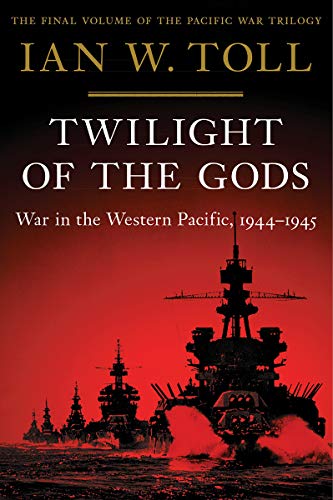 “Toll provides the perfect blend of strategic and operational detail of the military actions that covered nearly half the globe.”

Ian Toll’s final volume of his Pacific War trilogy covers the war from the summer of 1944 to the Japanese surrender in 1945. Using meticulous research, including previously untapped primary sources, and a brisk narrative that combines strategic, operational, and personal perspectives, he presents a very balanced look at the critical decisions and actions on both sides that concluded the war.

The book really stands out for two reasons. First, Toll takes a very critical look at American leaders, particularly their strategic campaign planning and operational leadership. In particular, both General Douglas MacArthur and Admiral William Halsey get a great deal of deserved criticism for their failures of leadership.

MacArthur’s ego and need for media attention has been well-chronicled, but the author examines MacArthur’s mostly ignored clandestine efforts to generate a Republican Presidential run in 1944, an unseemly action at best by a subordinate commander in time of war.

In addition, although MacArthur was adamant about the U.S. liberating the Philippines as a stepping stone to an eventual invasion of Japan, the alternate proposal for the U.S. to perhaps invade mainland China to seize a supply port for the Nationalist Army in anticipation of the postwar struggle for China is an intriguing case that Toll explores in some detail, offering a fascinating venture into what might have been.

Admiral Halsey receives the author’s harsher analysis for multiple failures of command judgement. Halsey desperately wanted to achieve the decisive fleet victory denied him at Midway and the Philippine Sea where his former subordinate Admiral Raymond Spruance commanded the American carrier forces. In both battles, he felt Admiral Spruance had not been aggressive enough in pursuing the beaten Japanese, a deficit he was determined to avoid should he face the same situation. When he sees his opportunity in October 1944 to render the death blow to the Japanese Navy, Halsey races to engage, leaving the vulnerable American amphibious forces in Leyte Gulf almost unprotected against a Japanese heavy task force sneaking in for a flank attack.

Only a heroic and suicidal defense by a small American naval force providing close air support for the troops ashore saves the beachhead from almost certain destruction, and Halsey’s rash actions almost led to his being relieved of command. More negligent, at least from the author’s point of view, was Halsey’s mishandling of the fleet in the face of a giant typhoon in December 1944, which ended up battering the fleet, sinking three destroyers and killing hundreds of sailors. Like MacArthur, only Halsey’s reputation with the American public saved his command.

Second, Toll takes a more comprehensive look at the Japanese perspective of the last months of the war than many previous histories. The Japanese home front is often overlooked, and his research shows that the Japanese people were pessimistic yet resigned to their country’s faltering war effort that even outlandish propaganda and a smothering police state could not hide. By late 1944, the Japanese military was in desperate straits, with much of its army still bogged down in China, its Navy depleted of carrier aircraft and pilots, and its economy becoming strangled by a tightening noose of American submarines.

This desperation leads to some incredible strategic and operational decisions that, while having minimal chance of success, allow the Japanese military to die gloriously for the Emperor. This is epitomized by the use of kamikazes throughout the rest of the war, especially during the arduous Okinawa campaign. Despite ambivalence by many quarters of the Japanese military, something that may surprise readers of earlier Pacific War histories, the Japanese military commanders send waves of what are essentially war’s first true smart weapons against the American fleet in a grueling battle of attrition.

The kamikazes are extremely effective tactical weapons and damage or sink dozens of American warships, including several fleet carriers, but they have no long-term impact of the eventual outcome of the battle. However, combined with the fanatical resistance of the Japanese 32nd Army on Okinawa and the eventual decision by President Truman to drop atomic bombs on Japan the story becomes more clear.

Even with the horrendous destruction of these two weapons, combined with the multiple firebombing raids on Japanese cities, the Japanese military are still not willing to accept the Allied terms of the Potsdam Declaration. Toll recounts the very tense period between August 6 and September 1 when the personal intervention of the Emperor is needed to ensure the Japanese surrender and the Allies are still wary of the full acceptance of defeat by the Japanese military until the first American occupation troops land on Japanese territory.

This volume brings the author’s truly epic trilogy to a close. Toll provides the perfect blend of strategic and operational detail of the military actions that covered nearly half the globe. He doesn’t neglect the logistical or home front either, showing how the industrial might of the United States doomed Japan to defeat in a war they could never win, yet their leaders considered inevitable.