Twenty-Two on Peleliu: Four Pacific Campaigns with the Corps: The Memoirs of an Old Breed Marine 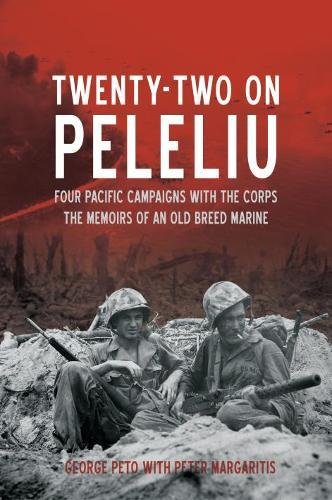 “Twenty-Two on Peleliu will haunt, enchant and thrill . . . it will inspire you with stories of heroism and courage . . . By the end, you’ll understand why these men and women were called, ‘The Greatest Generation.’”

Imagine sitting down next to a crackling, warm fireplace in my home state of Ohio, listening to an old man named George Peto talk about his life. Peto grew up middle class in the area around Akron. He had a brother; an alcoholic, abusive father; plus a warm, affectionate mother.

The first thing you notice is the man’s remarkable command of memory.  He can pluck detailed stories and names from the rafters of distant memory: tales of his childhood during the Great Depression, hard work while traveling the country and frightening anecdotes of fierce combat during WWII in the Pacific Theater. It’s as though he is taking dictation, referring to detailed notes, or reading a comprehensive diary. That he can recall such details after so many years is nothing short of astonishing.

George Peto has a significant depth of personality. At times he appears juvenile, with a ceaseless appetite for alcohol, women, and danger. He is willing to perform very tough work during the Depression. At other times, Peto is nothing less than a fearsome, courageous Marine, killing “Japs” as a forward observer with mortar fire and in hand-to-hand combat.

Peto is a down-to-earth person. What you see is what you get. Nothing you will read is fluff, designed to make Peto into a combat hero. It would have been entirely unnecessary and inappropriate. Peto’s bravery comes from deep within a heart that’s all American. But his character is not the archetypical hero. He drinks too much, fights, and spends time in the brig. He also leads fellow Marines into brutal combat. Peto fights for his country like a demon. But he is imperfect, as we all are. This memoir reveals each flaw and every instance of powerful courage.

From Marine boot camp to the last major battle of WWII, at Okinawa, Peto keeps the reader enthralled, pouring out the bloody contents of one vicious battle after another. Peto shows us the physical and psychological struggle of boot camp crushing the mind and body of a teenager and replacing it with the soul and physique of a lean, mean fighting Marine. No longer an adolescent with juvenile ideations, the new Marine eats nails for breakfast and bullets for dinner. He becomes a fierce tool in the dramatic battle to save our great nation.

Daring and opinionated, Peto has a knack for getting into and out of military misfortune. Yet we see Peto grow and mature through boot camp, in battles and even in the brig. The rustic Ohio boy gradually transforms into the brave and effective combat soldier that the Marines required to defend our freedom.

We enter battle with Peto in every situation, on various dangerous islands, including beach assaults; hand-to-hand jungle fighting; climbing mountains; pushing through rivers of mud; engaging civilians and the enemy; and long gut-busting trips on rolling, vulnerable battleships, and personnel carriers. Peto sees close friends die and by the end of the war, he is displaying symptoms of combat fatigue. Readers sojourn through the best and worst of human nature.

Congratulations to the publisher for allowing Peto to tell the story in his own unswerving, first-person style. Memoirs are rarely fine literature. In this case, it is unimportant. Co-author Peter Margaritis, along with the editor, adeptly handle the transition and flow from Peto’s folksy conversational style into an evocative, accurate  history book with very detailed footnotes and references. Kudos also to the publisher for including pictures, maps, and diagrams, allowing the visual learner to keep up, enhancing the reading experience.

Twenty-Two on Peleliu will haunt, enchant and thrill you. And it will inspire you with stories of heroism and courage under fire. By the end, you’ll understand why these men and women were called, “The Greatest Generation.”