Twentieth-Century Boy: Notebooks of the Seventies 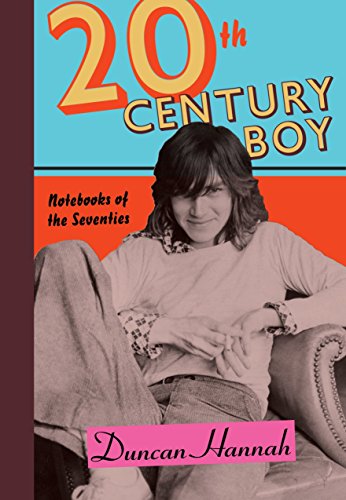 The crescendo for Duncan Hannah’s Twentieth-Century Boy takes place in February 1976, more than 100 pages before the end, and four years before the legendary 1980 Times Square Show when his paintings hung next to those of the New York art world titans Jean-Michel Basquiat and Keith Haring.

Hannah, then 24 years old, was in his Manhattan apartment with David Hockney, the British-born artist famous for paintings of southern California swimming pools and more. On a wall of the apartment there was a framed photo of Hockney himself.

The inscription read: “For my dear Duncan, lots of love, XXOO, David H.”

Hockney gazed at Hannah’s work, but didn’t say a word. It wasn’t until a day later, when he was asked point blank to comment, that he obliged.

“Your drawing is a bit heavy-handed in the American fashion,” Hockney said. “If I was you, I would strip away all your flashy gimmicks and dare to make ‘plain’ paintings. You will be original . . . You’ll get where you need to go with time and hard work.”

Hockney said a lot more, and Hannah quotes him at length, but the stuff about patience, diligence, persistence, and originality are at the heart of his comments.

Hannah seems to have taken Hockney’s advice seriously, not only for his paintings, but also for his prose, though at times it’s not clear whether Twentieth-Century Boy was written in “plain” style, or with “flashy gimmicks,” or perhaps some of both.

Hannah has his cake and eats it, too.

In the Preface to his book, which he insists isn't a “memoir,” but rather a collection of “journals,” he explains that he “removed a lot of extraneous detritus” and “changed some of the names to protect the innocent, and also the not-so-innocent.” He also allows that he missed “notating chunks of experience.”

One wonders what he missed and what he removed, especially since the author himself explains, “Never believe what an artist says, only what he does.” Good advice. Perhaps some of the good stuff never made it into the journals.

Indeed, Twentieth-Century Boy reads like a carefully crafted work of art. Savvy readers might be inclined to see it as literary kin to James Joyce’s classic, A Portrait of the Artist as a Young Man. After all, Hannah’s journals offer a self-portrait of the painter from the age of 18 to the age of 29. Still, for Joyce’s words “young man” one might substitute “adolescent,” “flâneur, “playboy,” “careerist,” “alcoholic,” and “drug addict.”

Hannah does not shy away from describing his use and abuse of drugs like cocaine, his binge drinking, and hyperactive sex life.

There doesn’t seem to be a day when he doesn’t feel “the prick of desire.” Then, too, there’s his abiding passion for the heady rock stars of the era, including Roxy Music, The Talking Heads, David Bowie, and Patti Smith.

Hey, it was the 1970s and it was New York, the metropolis Hannah describes as the apex and the vortex of the known universe.

Hannah was young, beautiful, sexy, and an intellectual, too, who compiled exhaustive lists of the books he read, from David Dalton’s James Dean: The Mutant King to Frank O’Hara’s Standing Still and Walking in New York and William Burroughs’s The Last Words of Dutch Schultz to name just a few.

Everything he read seems to have gone into the creation of his many personae.

Uncommonly talented and with a ringside seat to observe the antics of artists like Andy Warhol, Larry Rivers, and David Hockney, he did what many young men of his generation did in New York in the 1970s: He went to extremes.

Twentieth-Century Boy offers a fast-paced record of a time and a place unlike no other, when teenagers and college kids reaped the rewards and the penalties unleashed by the cultural revolutions of the Sixties.

Hannah covers some of the same ground that Patti Smith covers in her memoir Just Kids, though his book is much more sprawling than hers. She chronicles her intimate relationship with photographer Robert Mapplethorpe and their days together in the Chelsea Hotel.

Hannah is all over the map. He’s also with dozens of girls and women, though to his credit he doesn’t keep score or rate them.

Still, he looks at the female of the species though the eyes of a lusty adolescent male. The gaze is gendered.

If Twentieth-Century Boy is to be trusted, the women in Hannah’s life initiated sex; he obliged willingly. It was the pre-AIDS era of the “zipless fuck,” as Erica Jong called it in her 1973 bestseller, Fear of Flying.

“This was a very long time ago, totally different from today’s climate,” Hannah writes. Indeed, it was. He adds, “The sexual landscape was different then—wide open.”

Not surprisingly, one of his earliest works—which is reproduced here—is titled, Twin Gynecologists. The reader knows precisely what’s on Hannah’s mind much of the time.

He calls one young woman with whom he has sex a “serpent,” and he describes “her golden pussy guiding me in.”

Hannah seems to have been totally unaware of the women’s liberation movement that swept across New York in the decade that he portrays in Twentieth-Century Boy. The twentysomething-year-old artist didn’t take note of sexual politics, or any kind of politics at all.

Nixon isn’t more than a blip on his screen.

One might remember that the boy depicted in these pages is white and privileged in a world that seems almost entirely made up of privileged white people, including his parents who show up occasionally and scold their son for acting badly.

Sometimes, the author seems liberated and at other times he seems decadent. That was part of the beauty of that ambiguous moment in the history of the American Empire as it went down to military defeat in a place called Vietnam that Hannah hardly noticed, if at all.

Fortunately, he does not apologize or moralize, though he does say that when he opened his journals and reread them years later, “it was a weird feeling to reconnect to my youthful self.”

By exploring his youthful self, Duncan Hannah has written an American literary classic to accompany his classic portraits of women who look absolutely fetching.

Think of Twentieth-Century Boy as a novel in the form of a journal that descends into the inner circles of the New York art world, and that lays bare the mind and the body of the artist himself.

“Writing was a way of self-mythologizing,” he explains. “I was under the spell of Kerouac.”