The Twelve Lives of Alfred Hitchcock: An Anatomy of the Master of Suspense 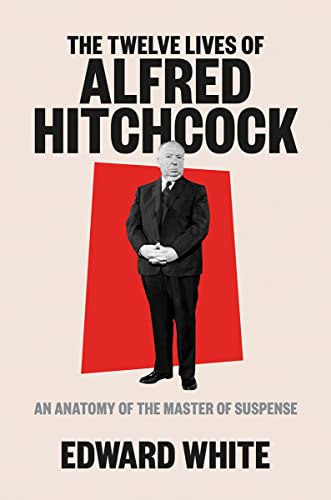 For 50 years he was known around the world as master of suspense, from his 1928 silent The Lodger to 1972’s Frenzy, Alfred Hitchcock continued to mesmerize audiences. The short list of his cinematic classics—Rebecca, Suspicion, Shadow of a Doubt, The 39 Steps, Foreign Correspondent, The Lady Vanishes, Strangers on a Train. Notorious, Rear Window, North by Northwest, Vertigo, and Psycho—represents the height of his artistic achievement.

In his new book, Edward White explores Hitchcock’s life and career from 12 different lenses: The Auteur, The Entertainer, The Womanizer, The Voyeur, The Family Man, The Londoner, The Murderer, The Dandy, and more. These were all refined personas of Hitchcock—all aspects of Hitchcock the filmmaker and complex man who channeled his private obsessions and insecurities into cinema magic and nightmares.

White doesn’t avoid the oft told tales of Hitchcock, many of which continue to entertain, but throughout the book he goes for something more. He dissects the backstory to reveal a bigger picture about what Hitchcock brought to the artform and to reveal the man behind the public persona.

As public a figure Hitchcock was, he was insulated by the lore of his celebrity. White illuminates Hitchcock’s youth, and the horror of WWI with German Zeppelins menacing the skies of London. The son of a successful grocer, his father died when Hitch was 15. As disaffected as he acted at the time, Hitchcock’s macabre muse was already developing.

His parents took him to the theater, and throughout his life he returned to themes from British storytelling, the “penny dreadful” about the haunted Mary Rose, the plays of Philip Barrie (Peter Pan’s Lost Boys) as well as Oscar Wilde’s craven portrait of Dorian Gray.

Hitchcock was not universally loved in the industry. He cast himself as the sole creator of his films and gave little credit to the screenwriters he leaned on to make his often-chaotic ideas, however ingenious, into coherent screen narratives. White reports that after a favored writer thought their script was complete, Hitch would pass it around among other writers “like a bag of potato chips.”

The 1976 film Frenzy was a reprise to all his overt and subliminal cinema narratives that Hitchcock developed in his earlier films, without the censorship. There is an added layer of brutality in its explicitness. As White reveals, Hitch punctured his own high-profile persona, admitting that he was still that little boy fascinated murders in grisly detail, but always with a definite complex point of view other than shock and horror, even though the scenes parleyed on those elements.

The chapter called The Womanizer chronicles Hitchcock’s motives and behavior with leading women in his films when he got older. From the start of his directing career, Hitchcock hired women. He worked under his future wife Alma Reveille, who was a top editor at Britain’s Gaumont-British studios. Many of his films had narratives with women as sexually liberated and the heroes of the story. Hitchcock considered his core audience made up of women. Others see his films as gratuitous depictions of women being terrorized, sexually assaulted and murdered.

There were also stories about his behavior with women he cast in leading roles. Tippi Hedren, star of The Birds and Marnie provided the most infamous accounts of sexual harassment leveled against him.   Hedren had no previous film experience, so put up with a lot, but eventually resisted some of Hitchcock’s creeper behavior. There were incidents of sexual advances and physical contact as well as extreme set-ups to get Hedren to react in scenes. Most infamously putting real birds, not mechanical ones (as she had been assured) in the climactic scene in which she must fend off a seagull attack in an attic.

Other women who worked with Hitchcock described similar incidents, and many “borderlines” creeper incidents of harassment and boorish episodes with the director. Of course, prevailing attitudes (and laws) gave Hitchcock a lot of supportive cover. Outside of legal charges of rape and criminal assault, on-the-job harassment by men in power was overwhelmingly both tolerated and covered up by a code of silence.

Hitchcock’s films have been analyzed exhaustively, and White repeatedly tries not to go over well-worn lore; his most incisive chapters—The Voyeur, The Womanizer, The Pioneer—are fascinating, but some of the other chapters strike the reader as overreaching analysis. Hitchcock’s diehard film fans won’t mind a bit.