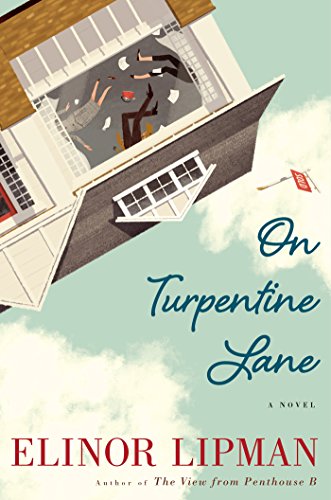 In these troubled times, Elinor Lipman’s On Turpentine Lane provides light entertainment, a pleasant escape, and a delightful and amusing romantic comedy.

On Turpentine Lane is reminiscent of madcap romantic comedies of 1940s Hollywood, starring the likes of Audrey Hepburn and Cary Grant. From early on in the novel, it is clear that the attractive, witty hero, Nick and narrator-heroine, Faith will fall in love and end up together despite nuisance exes, parental problems, a murder mystery from the past, and job complications.

And yet, even though the ending is hardly a surprise, On Turpentine Lane is a page-turner. Every other chapter seems to involve some sort of “crisis” or event that eventually gets resolved neatly. Lipman is a very skilled plotter; she constructs numerous entanglements and characters and ties them together deftly, if improbably.

The characters of In Turpentine Lane are largely stock figures. Faith and Nick exchange perfectly constructed witty banter, as do the police, and Faith’s mother and brother Joel. When the police are inspecting Faith’s basement for evidence of a murder long before Faith owned the house, Faith has an exchange with the police detective Brian:

“I said, ‘In big cities, or at least on cop shows about big cities, they use a chemical that shows blood even after it’s washed away. They can tell if a washing machine was used to cover up the murderer’s bloody clothes. Even when the cycle is finished.’”

“’Is that right?’ Brian asked. ‘Imagine that.’ He made a little show of tiptoeing to my washing machine, lifting its lid, and peering in.  ’Just as I thought,’ he said.’ Let’s read her her rights.’”

This dialogue, though fast-paced and lively, is straight out of a TV sitcom.

The other characters are also clichés. Stuart, Faith’s ex-fiancé, of sorts, is a flakey, self-absorbed near-do-well, who sponges off of others, including Faith and his lesbian mom and stepmother; Nick’s ex-girlfriend Brooke is a spoiled mean girl who just wants to get married; Faith’s midlife crisis afflicted father leaves her mother for an attractive, manipulative younger woman, and so on.

Despite all of its contrivances, On Turpentine Lane is a highly engaging, charming read. It’s an effective feel-good novel that, on occasion, may be just what the doctor ordered.